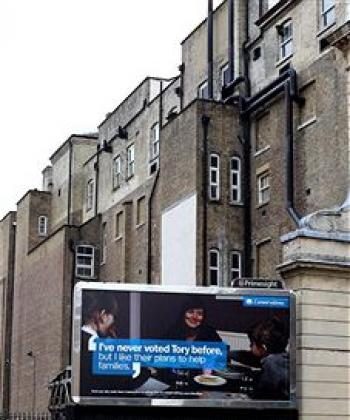 A family walk past one of the Conservative party's new nationwide poster campaigns on February 15, 2010 in London (Dan Kitwood/Getty Images)
US

Simon Veazey
Freelance Reporter
Simon Veazey is a UK-based journalist who has reported for The Epoch Times since 2006 on various beats, from in-depth coverage of British and European politics to web-based writing on breaking news.
View profile
Follow
biggersmaller
Print
LONDON—Britain’s pregnant teenagers now share something in common with Popeye, thanks to a statistical fumble by the Tory party.

The Conservative Party’s pre-election campaign on ‘Broken Britain’ (and out how to fix it) has been hit by a wandering decimal point.

In a document published on Sunday, ahead of a new election advertising campaign, the Tory Party said that more than half of girls under 18 in the country’s most deprived areas fell pregnant.

In the 20 page document, intended to spear the Labour Party on its own election pledge of social mobility, the Tory party had attacked the incumbent Labour party for the creation of “two nations” – the wealthy, and the impoverished.

But the assertion of a 54% level of conception in the 10 most disadvantaged areas of England was erroneous – the real figure was 5.4%.

With political stakes mounting under the shadow of the approaching election, opposition politicians were quick to jump on the mistake.

But the Conservative party defended the document, playing down the gaffe. "It makes no difference at all to the conclusions of a wide-ranging report which shows that Labour have consistently let down the poorest in Britain," said a Tory party statement.

Rob Eastaway, former President of the UK Mathematical Association, said that the error wasn’t the first of its kind. “There’s quite a long history of politicians and decimal points, ” he told the BBC.

But Mr Eastaway said that although it is easy to make a statistical error, the key is knowing how to interpret the data critically — and to thus spot mistakes.

“Sometimes people publish a statistic and if it looks the kind of thing what they want to see, then they aren’t going to be critical of the number.”

One of the most infamous misplaced decimals was responsible for the creation and popularisation of Popeye.

“This seems to have be based on some findings in 1870 that Spinach has ten times as much iron in it as other vegetables,” said Mr Eastaway. “It was only later discovered, post-Popeye, that this figure was spurious – the decimal point was in the wrong place”

The Tory statistical stumble was seized on by the two other political parties as an example of the Conservatives being out of touch with the nation, and of their tactics of deception.

Calling on the Tories to withdraw the document, Children's Secretary Ed Balls said the "dodgy" figures were an insult to communities.

He said: "They are totally out of touch and have nothing to say on the important issue of reducing teenage pregnancies except smears and distortions."

House of Commons leader Harriet Harman told the BBC: "They are so out of touch. Someone junior made a mistake and no-one picked it up."

The Liberal Democrats' chief of staff, Danny Alexander, said: "The Tories seem to think that half our teenagers are pregnant, our cities are like The Wire and that people will get married for a few extra quid.”

On Monday Tory leader Mr Cameron and party chairman Eric Pickles launched a poster campaign designed to reach out to voters who would not usually vote Conservative.

In the foreword to the "Two Nations" document, Mr Cameron said: "Labour's great claim is that they are 'for the many, not the few'.

"That rings hollow today. This report exposes the truth: after 13 years in government, the party that prides itself on fairness has delivered the very opposite. Labour have failed the poorest in our society."