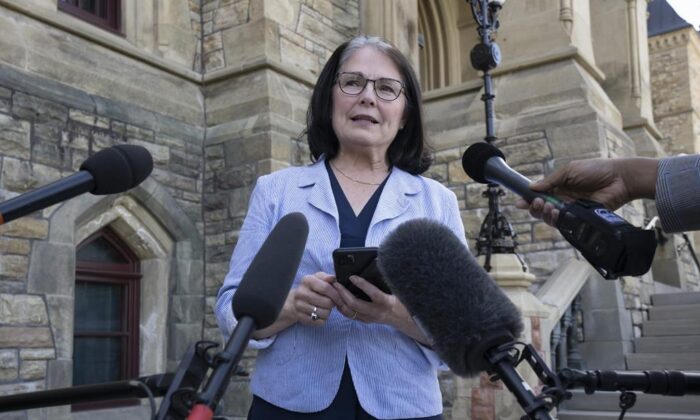 Conservative MP Cathay Wagantall speaks with reporters outside West Block in the Parliamentary precinct in Ottawa on June 3, 2022. (The Canadian Press/Adrian Wyld)
Canada

OTTAWA—A Conservative MP who refuses to disclose her vaccination status tried to access the House of Commons precinct after a COVID−19 vaccination mandate was imposed last year and was required to leave.

Cathay Wagantall, who represents the Yorkton−Melville riding in Saskatchewan, told a news conference on Parliament Hill that she was informed she would have to leave the House of Commons.

Wagantall says she spoke with the Conservative House leader Friday, who informed her that though she could stay while the House was sitting, she would have to leave by the end of the day.

The House’s board of internal economy set a requirement in November 2021 that anyone on the precinct must show proof of vaccination against COVID−19, though Speaker Anthony Rota later ruled the board overstepped its authority.

The Liberals and NDP then joined to pass a motion to extend hybrid sittings of Parliament, which also specified that anyone entering the precinct must be fully immunized against COVID−19 or have a valid medical exemption.

Wagantall says she left on her own accord, but believes once the House rose, she would have been apprehended and removed.

After she left the building on her own, she was escorted by Parliament’s sergeant−at−arms.

She says she came to Ottawa at the end of April and before then had driven to and from Ottawa three times on her own.

Wagantall says she is not permitted in her office and has not accessed it since November 2021.

She says she is not allowed to fly or take a train, noting that it takes about three and a half days driving by car to travel to Ottawa from her riding in Saskatchewan.

“Ontario is open. My province has been open for a long time. I’m not making light of anyone who has suffered with COVID. But regardless, it’s time for this country to get on.”