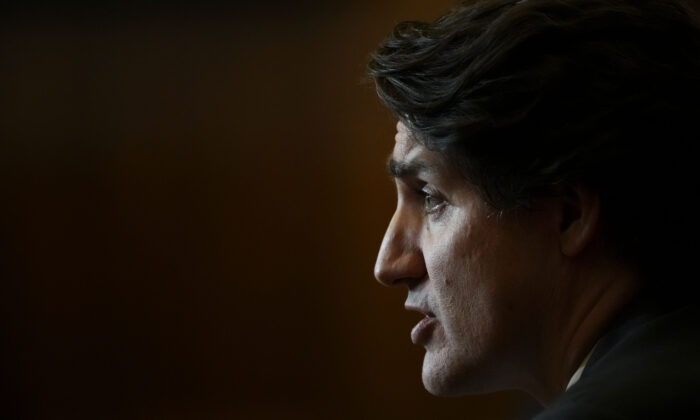 A Conservative MP is asking the RCMP to investigate Prime Minister Justin Trudeau for comments that the MP said many believe were made with the aim of “promoting hate” against Canadians who haven’t received a COVID-19 vaccine.

Colin Carrie, MP for Oshawa, Ont., said on social media that he has been getting calls, online messages, and in-person visits from his constituents—a majority of whom are double- or triple-vaccinated—over the past few weeks raising concerns. He says the constituents say the government-mandated COVID-19 vaccination requirement “crosses a line,” as does the idea of a “vaccine tax” like the one recently announced in Quebec.

“Increasingly, fully-vaccinated constituents have grown more alarmed, worried—even resentful—about the tone and nature of recent comments by the PM and some of his Ministers officials, particularly their clear effort to divide Canadians with name-calling, demonization, and overly-harsh, off-base characterizations of our unvaccinated families and friends,” Carrie wrote in a statement released on Jan. 21.

The Epoch Times reached out to the Prime Minister’s Office for comment but didn’t hear back by publication time.

This post is a bit long but here’s what I’m doing in response to the PM’s ongoing effort to demonize some Cdns incl a good number of fair-minded & decent constituents of mine in #Oshawa. Pls have a read: https://t.co/jdPO79ZusQ. #UnitedNotDivided #OshawaStrong #cdnpoli #onpoli pic.twitter.com/cJLs1GuTui

Carrie said it is “unhelpful and plainly offensive” for Trudeau to say unvaccinated people are science-deniers and to call them derogatory names including “extremists” as he did during an interview on the French-language program La semaine des 4 Julie on Sept. 16, 2021.

“They are extremists who don’t believe in science. They’re often misogynists, also often racists. It’s a small group that muscles in, and we have to make a choice in terms of leaders, in terms of the country. Do we tolerate these people?” Trudeau said.

Carrie said Trudeau’s remarks are “tantamount to inciting hatred against an identifiable group of individuals,” which he says is punishable under Section 319 of Canada’s Criminal Code and could result in up to two years’ imprisonment.

He noted that these comments have left many Canadians fearing for their safety, their jobs, and their well-being, with some becoming afraid of reprisals or being subjected to ridicule or hate in the public space or even among their own friends or family.

“No one should be discriminated against or suffer threats, abuse, ridicule, or hate due to their freedom of choice,” Carrie said.

He added that the vast majority of those who remain unvaccinated are not conspiracy theorists or so-called “anti-vaxxers.” Rather, “many have legitimate thoughtful genuine concerns about their health, their bodies, or the well-being of themselves, their children, or families.”

Carrie said that, at the urging of both vaccinated and unvaccinated Oshawa residents, he has written to the RCMP commissioner to raise the issue of the prime minister’s comments in relation to the Criminal Code, “given that he’s refused to clarify, take back, or apologize” for the comments he made on the Québec-based television program.

“The PM’s egregious statements were, many believe, made with the express aim of promoting hate against an identifiable group of citizens–and specifically–against individuals who, for whatever reason, remain unvaccinated,” Carrie said.

“On behalf of my constituents and those Canadians who are angered—and saddened—by the PM’s hateful language and demonization efforts, I’ve urged the Commissioner of our national police force to uphold the law and Canada’s Charter of Rights and Freedoms and to investigate the PM for using his position to bully, coerce, punish, or demonize a subset of Canadians.”

Trudeau has used strong words towards those who don’t want to get COVID-19 vaccination on other occasions as well.

In September 2021, while at a campaign stop prior to the federal election, he referred to anti-vaccination protesters as “those people” and suggested that they “are putting us all at risk.”