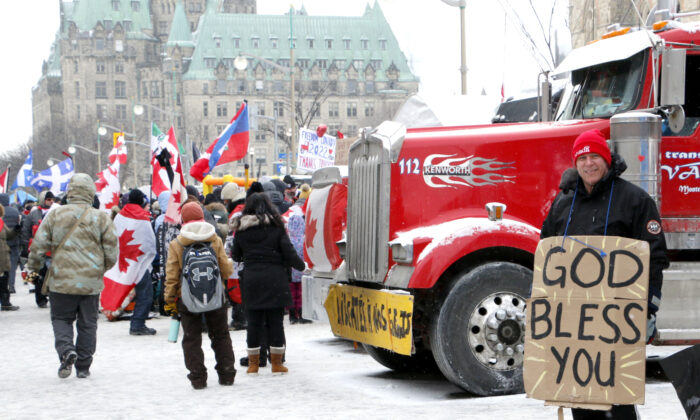 A protester holds a sign on Wellington St. during the Freedom Convoy protest in Ottawa on Feb. 12, 2022. (Noé Chartier/The Epoch Times)
Canada

A Conservative MP is asking the privacy commissioner to review events surrounding the freezing of financial accounts of Freedom Convoy supporters during the public order emergency declared by the government in February.

MP Adam Chambers wrote to commissioner Philippe Dufresne on July 6 to highlight that a study on the issue done by the House of Commons finance committee raised some questions.

Based on testimony from witnesses collected by the committee from Feb. 22 to March 17, Chambers said that “Receiving Institutions received no instruction on how to properly store, keep, or use the data received from the RCMP.”

“Receiving Institutions” describes financial institutions, including banks, credit unions, and cryptocurrency platforms, that were told to freeze the accounts of convoy supporters compiled on an RCMP list.

“There were no limits placed, or instruction provided, regarding how Receiving Institutions may use or rely on data received, even after the Act’s use has expired,” wrote Chambers.

“No instructions were provided on how long data was to be stored or a defined time period after which data should be destroyed,” and “there appear to have been no instruction or restriction on who or how many individuals within a Receiving Institution may have access to the data,” he added.

Along with these assertions, Chambers, who sits on the finance committee, relayed a number of outstanding questions he says the committee was unable to determine.

He wants to know how many Receiving Institutions were involved, how the information was transferred by the RCMP, and what information exactly was shared.

The MP representing Simcoe North (central Ontario) said he hopes the commissioner will conduct a review of the government’s actions and provide guidance in case a similar situation emerges in the future.

The Liberal government invoked the Emergencies Act on Feb. 14 to deal with cross-country protests and blockades demanding the lifting of COVID-19 restrictions.

Parliamentary committees have looked at the issue and the Standing Committee on Finance presented its related report in June.

It makes 15 recommendations, including calling to “engage with all organizations that were asked to implement emergency measures … to determine” their efficiency.

It also says caution should be exercised in invoking the act and that the government should refrain from using the precedent as a template for dealing with the public, “particularly in response to protests and demands by indigenous communities.”

The Conservatives published a dissenting opinion with the report, saying they cannot support its recommendations. It says the majority of recommendations from Liberal MPs seek to reaffirm the government’s actions.

The dissent also says the financial measures applied were not necessary to clear the blockades.

“During testimony neither government, law enforcement, nor witnesses made a compelling case that the situation in Ottawa required the holus-bolus overriding of Canadian’s Charter Rights from unreasonable search and seizure were in order.”

Minister of Justice David Lametti has said that measures were “Charter compliant,” though while testifying before a special joint committee on April 26, he refused to share his analysis of Charter compliance when asked by an MP. Lametti said the freezing of accounts did not amount to a seizure.

The freezing of accounts without a court order was one of the most controversial measures brought by the Emergencies Act.

The RCMP said it acted as a deterrent to protests, whereas detractors said it had no bearing aside from being an overreach by the government.

Additional concerns surfaced about the measures when witnesses said that no verification was done on their application, or that they would have a permanent impact.

Isabelle Jacques, assistant deputy minister of finance, told the finance committee on May 3 that her department did not verify the freezing of accounts with financial institutions, instead relying on their “good faith.”

“There is no verification that was done,” she said.

Angelina Mason, general counsel and vice president of the Canadian Bankers Association, told the committee on March 7 that banks had also used their own “determinations” to freeze accounts, going beyond the RCMP list.

Mason also said that those who had their accounts frozen would have a permanent mark on their file.