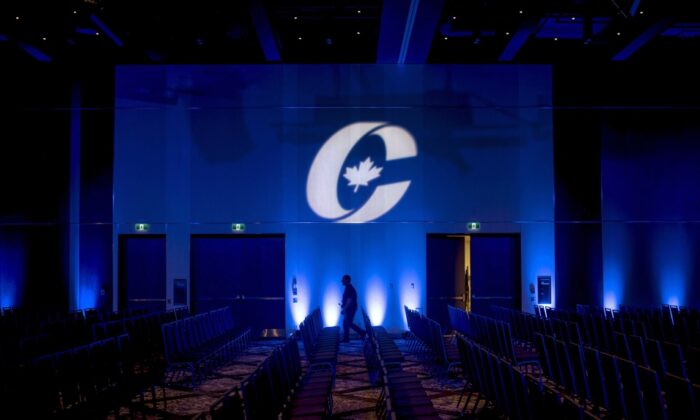 A man is silhouetted walking past a Conservative Party logo before the opening of the Party's national convention in Halifax, on Aug. 23, 2018. (Darren Calabrese/The Canadian Press)
Canada

The Conservative Party has announced the six verified candidates that will appear on the ballot in the upcoming leadership race, but three disqualified candidates are seeking answers for their rejection, saying they met all the requirements.

The party announced on May 2 that Scott Aitchison, Roman Baber, Patrick Brown, Jean Charest, Leslyn Lewis, and Pierre Poilievre made the cut.

Joel Etienne, Joseph Bourgault, and Grant Abraham were disqualified, although say they provided the required $300,000 and 500 nomination signatures before the deadline.

“It is with great disappointment that we were advised by the Conservative Party of Canada last evening that we were ineligible to advance in the Leadership Campaign,” said Bourgault, a business owner from Saskatchewan, on social media on May 2.

“They stated that our team did not meet the registration fees and compliance deposit of $300,000. Our team submitted $367,453 before the deadline of April 29th at 5:00PM Eastern Time.”

Bourgault’s campaign chair Ryan Olson told The Epoch Times they’ve asked for clarification and appealed the decision, noting that “many Canadians who are very upset with this news [are] calling and asking for answers.”

Abraham’s campaign says it is also seeking clarification from the party.

“We have yet to receive any explanation,” spokesperson David Benjatschek told The Epoch Times in an email on May 3.

“There has been so much energy and enthusiasm behind our campaign. We owe our supporters a truthful and transparent look at the decision and their process to arrive at it.”

Abraham, who is from B.C. and works as an international consultant, sent a “Call to Action” to his supporters to help pressure the party to revisit the decision.

“Demand an inquiry and proof that the campaign did not meet both financial goals that were set,” says the communication, which quotes an email from Campaign Life Coalition (CLC) about its efforts to get pro-life candidates on the ballot.

The CLC says it was “pretty excited” that three out of four endorsed candidates would appear on the ballot, but the excitement “turned to outrage” when it was announced Abraham was disqualified. The CLC endorsed Lewis, Abraham, Bourgault, and MP Marc Dalton, but the latter was unable to collect the required amount.

The CLC says it was told by the party that Abraham didn’t pay a 15 percent “administration fee,” which would raise the required amount to $345,000, but points out that Bourgault surpassed that amount yet he was also disqualified.

The CLC perceives this as an attack on the social conservatives within the party and says it will throw all its weight behind Lewis if she’s the only “socon” left on the ballot.

The campaign team of Etienne, a Toronto-based lawyer who has represented The Epoch Times Canada in the past, said they are currently communicating with the Conservative Party to repeal the decision as they had met all requirements, and would not comment further.

“We want a fair race. I’m not afraid of a hard fight, and the Conservative party is not one that should be cancelling legitimate contestants,” Lewis wrote on Twitter.

Brown also commented on the issue, saying on Twitter, “A party that stands for free speech should be about open exchange of ideas, not gatekeeping. I’m prepared to defend my ideas to become leader.”

A request for comment from the Conservative Party was unanswered by publication time.

“Final verification was based on the requirements set out under the rules, not any prospective candidate’s political beliefs,” Conservative Party executive director Wayne Benson told The Globe and Mail.

The approved candidates have until June 3 to sign up new members, and the vote will take place late in the summer, with the results to be announced on Sept. 10.