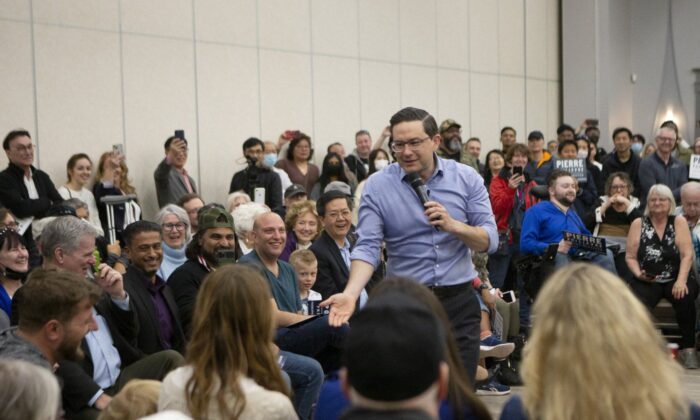 Tory Leadership a Resounding Win for Poilievre, but Can He Prevail in a Federal Election?

Pierre Poilievre may have scored a resounding win in the Conservative leadership race, but whether he can win in a federal election as late as three years away is less certain.

“One, the distribution of votes. Increasing his support out West won’t give him more seats. He needs support in Ontario,” he said in an interview.

Poilievre motivated more than 311,000 people to buy Conservative Party memberships before the June cutoff. Often, many people attending his rallies reported having voted for other parties besides the Tories in the past, including the NDP. Geoffrey Hale, political science professor emeritus at the University of Lethbridge, says Poilievre’s leadership campaign demonstrated his ability to rally people across Canada to his leadership.

“Mr. Poilievre won the most comprehensive victory of any Conservative leadership candidate, including Stephen Harper, since the formation of the new party in 2003. Winning 330 of 338 ridings, most by sizeable margins, and 68 percent of the available points provided him with a broad, deep mandate across the country, demonstrating not just impressive organizing skills but widespread appeal among new and existing members,” Hale told The Epoch Times.

“It’s his party and he has earned the right to shape it according to his priorities—subject of course to the realities of electoral politics.”

Scott Bennett, a political science professor at Carleton University, believes the 43-year-old Carleton MP has a shot if he builds bridges in Central Canada.

“His critics will say that he can’t win in Toronto and Quebec. However, I think he may make some inroads in Quebec if he can form an alliance with the provincial Conservatives there. They have similar views on the direction of government. Alliances with provincial PCs in Ontario will also be important,” Bennett said in an interview.

“The ground is shifting a bit in terms of public preferences. There is a wave of first-time voters who will nod and smile at the leftist agendas of many politicians, but privately they are very cautious, perhaps even prudent, in their view of virtue-signalling celebrity politicians and the many performative gestures of those who manage some of our major institutions. There may be surprising opportunities for gains among the young for a Conservative Party.”

Malcolm Bird, associate professor of political science at the University of Winnipeg, believes that Canadians may be thirsting for change from the Liberal government, and that the NDP is poorly positioned to benefit.

“I definitely think there’s a lot of dissatisfaction with Mr. Trudeau and what he’s doing and what he’s not doing. He’s not really saying much. The government of Mr. Trudeau, from my view, is starting to look more and more lame-duckish,” Bird told The Epoch Times.

“The working folks are being left behind here, and the NDP is failing because it’s oriented towards urban people, urban middle-class educated profs, lawyer, government people, not necessarily factory people.”

Bird says an issue that could hinder Poilievre is that conservatives don’t always get enough of a chance to make their case due to negative labelling, such as being accused of being a Nazi or a fascist or of promoting hate.

“Lots of mud will be thrown [to paint him as a] right-wing populist person, but really he’s talking about pretty basic meat-and-potatoes stuff like wages, taxes, jobs, wealth-creation, individual freedoms.”

“He’s made himself pretty well bulletproof on all the hot-button social issues,” Flanagan said.

“You can dredge up stuff from the past, and they will try for sure, but it’s his recent performance I think that gives him a lot of protection.”

Flanagan sees parallels between the current circumstances and the late 1970s. Voters turned to the leadership of Margret Thatcher in the UK and Ronald Reagan in the United States, both of whom were visionary and fiscally conservative, though controversial.

“[Poilievre’s] message is a positive message of economics. He has succeeded in creating a sense of novelty and energy. I think that comes from taking risks in his campaign, [such as] by going after the Bank of Canada,” he said.

“It made the media sit up and take notice. Everybody condemned him for it, but they had to report it. It was overdue. The bank did not do its job, and Poilievre grabbed that and ran with it. I think he’s been very successful.”