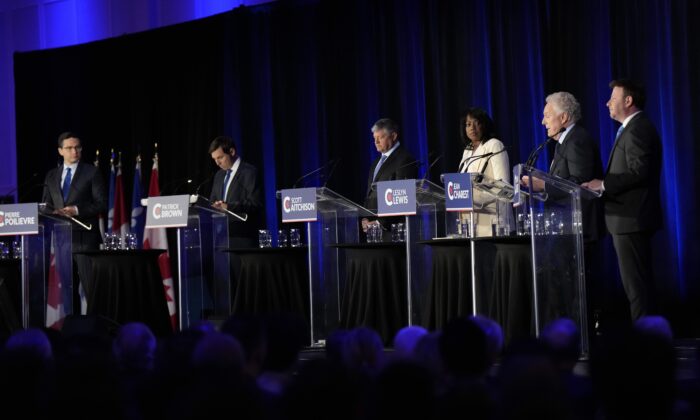 Tory leadership candidates presented their approach to China policy during the French-language debate on May 25, providing their response to the moderator’s question, “What, as prime minister, would be your attitude to China?”

Moderator Marc-Olivier Fortin prefaced his question with the context that China has now taken control of Hong Kong, and is expected to attack Taiwan’s sovereignty, which will pose a threat to Canada since Taiwan produces “92 percent of the [computer] chips we use every day.”

“And it is a way to improve relations with China that became worse under [former] Prime Minister [Stephen] Harper,” he said.

Jean Charest, a former Quebec premier, said there is a need for Canada to “reformulate” and review its foreign policy.

“We can see that our U.S. allies were always with us, and now that’s no longer happening,” he said, while noting China is emerging as a superpower.

Charest said the fact that U.S. President Joe Biden did not invite Canada to a recent meeting with 12 other Indo-Pacific countries to create a new economic zone with a focus on Asia-Pacific, says a lot about how the allies are now perceiving Canada.

“Why is that? Because we are insignificant in the eyes of our allies,” Charest said. “We’re missing in action in Asia.”

Charest proposed reaching more economic agreements with ASEAN countries and contributing to the security of the new zone with allies including the United States, Japan, and South Korea.

Pierre Poilievre said he believes Canada can advance its economic interests with China while also defending its principles and values.

“That is why I support the rights of Taiwan, which is a democracy in Asia, and we need to maintain good relations with Taiwan,” he said.

“We also need to stand up for human rights in China. And that is why I voted to condemn the treatment of Uyghur people, of Christians, and of other minorities in China. We can do both at the same time—that is what we did with the Harper government.”

Independent MPP Roman Baber said he is “not afraid of China,” and if elected prime minister, he would strategize with Canada’s allies in dealing with the communist regime.

“Justin Trudeau was too easy on China. China is putting Uyghur people in concentration camps. They are stealing our intellectual property. They are threatening to turn Taiwan into another Hong Kong,” he said.

Baber stressed that having lived under the communist reign of the Soviet Union when he was a kid showed him “we must never be afraid of facing what’s wrong.”

Leslyn Lewis, an MP for Haldimand-Norfolk, said trade with China “is no longer based on cooperation, but rather on confrontation.”

“That is the new reality. We need to establish new policies that take this new reality into account,” she said.

Ontario MP Scott Aitchison said while it is good that the federal government recently banned Chinese telecommunications Huawei Technologies from the country’s 5G network, there is still a need to examine all security threats “created by the hesitation of Justin Trudeau’s government.”

“China uses its military and economic power to sow instability, undermine world security in the Indo Pacific region, and violates human rights in the most flagrant way we are seeing in the world today,” he said.

Aitchison said he was also supportive of Taiwan’s sovereignty. “We need to recognize Taiwan as an independent, sovereign democratic country,” he said.

During the debate, Poilievre called on Charest to disclose the details about his consulting work for Huawei after leaving provincial politics.

Charest defended himself, saying he had not undertaken any assignment that goes contrary to Canada’s interests.

“The first thing I’d like to say is that I never worked on any issue that would jeopardize the interests of my country,” he said.

“And secondly, I am proud to have contributed something that has been confirmed, that I contributed to helping releasing Michael Spavor and Michael Kovrig.”

Cherest had previously worked as a member of the McCarthy Tétrault law firm that was hired in January 2020 to provide strategic advice to Chinese telecom giant Huawei following Canada’s arrest of the company’s senior executive Meng Wanzhou on a U.S. extradition request. Days after Meng’s arrest, the two Canadian men Spavor and Kovrig were arbitrarily detained in Chinese prisons for over 1,000 days in what is widely viewed as retaliation by Beijing.

Charest also counselled the Beijing-linked company in its bid for Ottawa’s approval to sell equipment for the construction of Canada’s 5G networks. Canada’s closest allies have banned Huawei from their 5G networks due to security concerns.

Spavor and Kovrig were freed last September after Meng reached a deferred prosecution agreement with the U.S. Justice Department. She was released soon after by Canada.