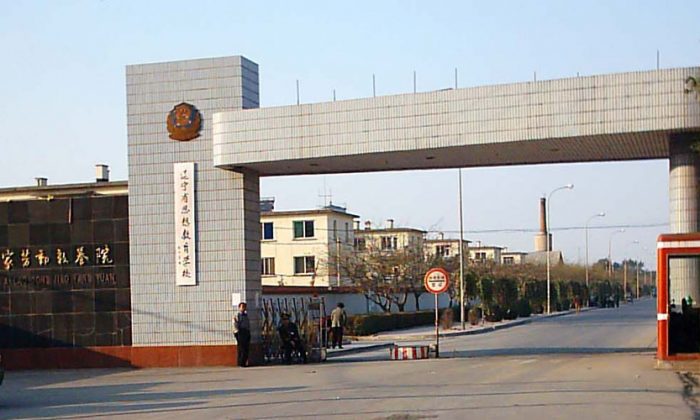 The main gates of the former Masanjia Women's Labor Campin Liaoning Province, October 2004. Masanjia now appears to be divided between a drug rehab facility and a prison, though the same prisoners suffer there in the same way as before. (Minghui.org)
China

The Masanjia Women’s Labor Camp was supposed to be closed down, but now it simply has two names
By Carol Wickenkamp

For years the tales of torture that came out of Masanjia Women’s Labor Camp in China’s northeast were a potent demonstration of the abuses of the country’s forced labor system. In turn, Masanjia’s apparent closure last year was seen as a hopeful sign that the system was, in fact, being closed down, as authorities had promised.

But recent reports from China tell a different story: the Masanjia Forced Labor Camp is alive and well, except for the fact that it’s no longer called the Masanjia Forced Labor Camp. Instead, the same sprawling set of buildings and facilities appears to be now put to use as both a “drug rehabilitation center” and as part of the Liaoning Province’s prison system. These bureaucratic modifications disguise the fact that the same guards, in the same buildings, abuse and exploit the same or similar prisoners—just as before.

Masanjia made world headlines in 2013 when an Oregon woman, Julie Keith, discovered a letter from the labor camp in a plastic Halloween kit shipped from China. Shocked, she contacted the media, which set about exploring the background of the camp.

It was exposure of that kind that the Chinese Communist Party found deeply embarrassing, and was part of the reason for its high-profile move to—on paper at least—close the system of re-education through forced labor, which has been part of the Party’s coercive toolkit since the 1950s.

When a CNN film crew visited Masanjia last year, it had every impression of being empty. No guards were in the watchtowers, and no one came to trouble CNN correspondent David McKenzie as he strolled within feet of the chain-link fence. Minghui.org, a website that carries firsthand reports from the persecution of Falun Gong practitioners in China, also reported last year that the remaining practitioners detained in Masanjia were being released. Falun Gong is a spiritual practice that has been persecuted in China since 1999.

Shang Liping, a female Falun Gong practitioner, was recently transferred from Shenyang Women’s Prison to the Masanjia Addiction Treatment Center, according to a March report in Minghui. The report continued that staff and police were the same people that had worked at Masanjia when it was a labor camp.

Yu Shuxian and Chi Xiuhua, two other female Falun Gong practitioners, were put into the same drug rehab center in Masanjia this January, according to Minghui. When family visited Chi, they found that “she had completely changed; her face was pallid and listless, she neither lifted her head nor opened her eyes, and she had no energy to speak,” according to Minghui. “Her family was distraught, extremely scared, and could not guess what torment she had been put through.”

Other sections of the large labor facility have been transferred to the provincial prison system, and operate as the Masanjia Prison District of Liaoning Province’s Shenyang Women’s Prison, according to Minghui.

The Shenyang provincial prison for women is extremely violent, with Minghui reporting 20 Falun Gong deaths since 1999. At present at least 84 Falun Gong practitioners are incarcerated in Liaoning Province’s women’s prison in Shenyang, many of them serving sentences of up to 13 years.

A group of Falun Gong practitioners who were held in the women’s prison in Shenyang were transferred to the Masanjia Prison District, most of them this year. Multiple telephone calls made by Epoch Times to phone numbers identified as belonging to Masanjia were not answered.

Niu Guifang, a female practitioner, in a trial thick with illegalities, was sentenced to the women’s prison in March 2013, and was transferred to Masanjia Prison District at the end of last year. Although her hands were injured by the prison police, and she couldn’t hold heavy things, she has still been forced to work every day in the workhouse at Masanjia, Minghui reported in April.

When the Communist Party announced the death of the re-education through labor system in early 2013, seasoned observers of the regime’s security system began expecting what has now transpired.

“Cosmetic changes” won’t stop the abuses, said Sophie Richardson, the China director at Human Rights Watch. Instead, they “might only further entrench the system,” she said.

A detailed report by Amnesty International nearly one year later observed: “Abolishing the RTL [re-education through labor] system is a step in the right direction. However, it now appears that it may only be a cosmetic change just to avert the public outcry over the abusive RTL system where torture was rife,” said Corinna-Barbara Francis, China researcher, in a December 2013 paper.

“It’s clear that the underlying policies of punishing people for their political activities or religious beliefs haven’t changed. The abuses and torture are continuing, just in a different way,” she said.

That same month the Tibetan Centre for Human Rights and Democracy noted, in its own report in the matter, that re-education through labor has simply been replaced with other forms of detention, like forced drug rehab and “legal education classes.” The group said, “These systems are already used in Tibet and merely continue the abuses associated with RTL under a different name.”

While the new division at Masanjia appears to be between a prison and a drug rehabilitation center, the latter, as far as prisoners of conscience go seems to be used in the same way that the old labor camp was used: Falun Gong practitioners are sent there by police, without a trial, regardless of their drug-free lives.

The mixing of prisoner types has taken place for years in China. “People from the Liaoning Provincial Labor Education Bureau came to audit us in 2011, and ordered that every Falun Gong practitioner needed to take a test. Our medical examination document listed us as drug addicts, but in fact, out of the nearly 400 inmates, only four were drug users,” former Masanjia inmate Qiu Tieyan wrote in October 2013 about her incarceration.

“We had to work six hours every day making military coats, forest coats, and firefighter jackets for the Jihua 3504 Limited Corporation in Changchun City. Outside of the workshop, we had to load and unload things, clean, and do other chores. Guard Wang Guangyun brought in her dirty laundry from home, and we had to wash it. We had to keep this a secret and do it quickly,” she said.

The same Minghui report said there are about 300 prisoners in the Masanjia Prison District, but did not give a total for Falun Gong practitioners held there.

Drug offenders are treated in the same way in detention as when the facilities were called re-education camps. They are forced to do factory work, light manufacturing, and repetitive labor.

Once locked up, there is little rehabilitation either—only brutality and hard labor, said Human Rights Watch in a 2012 paper.

“If people weren’t working hard enough we would beat them with a one-meter board, or we would just kick them or beat them with our hands,” a former re-education through labor guard from Guangxi Province told Human Rights Watch. “Sometimes people got beaten to death. About 10 percent of people who come into re-education through labor centers die inside.”