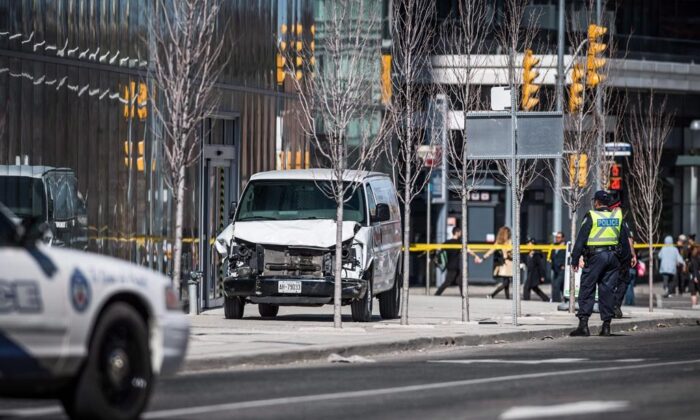 Police on scene after a van driven by Alek Minassian mounted a sidewalk and crashed into a number of pedestrians, in Toronto, on April 23, 2018. (Aaron Vincent Elkaim/The Canadian Press)
Canada

The man responsible for Toronto’s deadly 2018 van attack has been sentenced to life in prison with no chance of parole for 25 years.

Alek Minassian has also been sentenced to 20 years for 15 counts of attempted murder, which are to be served concurrently.

He was found guilty last year of 10 counts of first-degree murder and 16 counts of attempted murder.

Eight women and two men died on April 23, 2018, when Minassian, bent on infamy, angered by women who wouldn’t sleep with him and radicalized in the bowels of the internet deliberately drove a rented van down a busy sidewalk.

Another woman died more than three years later from injuries suffered that day.

Court heard dozens of emotional victim impact statements today from those deeply affected by the attack.