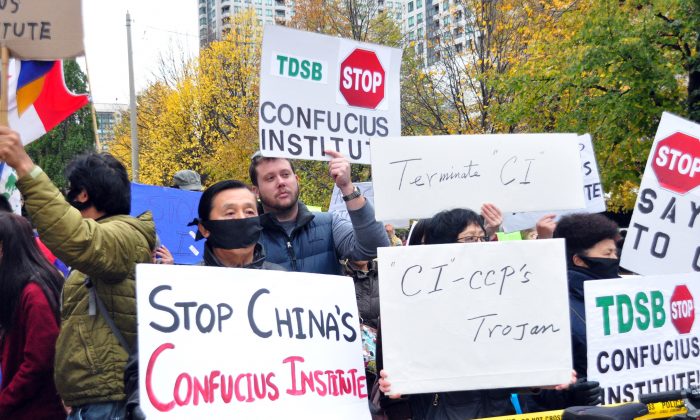 People demonstrate against the Toronto District School Board's partnership with the Beijing-controlled Confucius Institute outside the TDSB on Oct. 29, 2014. (Allen Zhou/Epoch Times)
Canada

Canada’s largest school board has shown the door to the Beijing-run Confucius Institute.

Twenty of the twenty-two Toronto District School Board (TDSB) trustees voted in support of a motion to terminate its agreement with the controversial program during a general meeting on Oct. 29.

“In the end of May, I met people who expressed grave concerns. They spoke to me about freedom of speech. People died for freedom of speech,” Ward 20 trustee Sam Sotiropoulos told the board.

“I take pride in valuing freedom of speech, which the Chinese communist government is against,” Sotiropoulos added, urging the board to vote to terminate the partnership.

Board vice chair Shaun Chen told Epoch Times he wasn’t surprised with the result of the vote.

“It was a very lengthy discussion, there has been a flurry of opinions and perspectives. It’s finally good to have closure on the issue.”

The board also voted to pay back any funds received so far for the Confucius Institute (CI).

“Tonight, the matter [should] be terminated and killed forever. No more monster in our history, should be no money owing,” Ward 1 trustee John Hastings said.

The partnership between CI and the TDSB was championed by former chair Chris Bolton while the rest of the board was kept in the dark about the details of the agreement. Bolton resigned in June a few months before the end of his term amid concerns raised by parents and many of the trustees about the partnership.

Ward 3 trustee Pamela Gough told Epoch Times after the vote that the entire agreement was kept “in a degree of secrecy and confusion” from the start.

“The trustees certainly were not made aware of the restrictions that were placed on the freedom of speech on the part of the teachers hired in China to come over and teach with the Confucius Institute,” Gough said.

“We were not made aware of the direct connection with the Chinese Communist Party, and of course we weren’t aware at the very beginning the way our own community felt so strongly outraged at the idea of this agreement between the public board of education in Toronto and an association with the Communist Party of China.”

TDSB is the latest in a line of educational institutions abandoning CIs.

The Canadian Association of University Teachers issued a statement last year calling on all Canadian universities and colleges to cut ties with CIs, describing the institutions as “political arms of the Chinese government.” The American Association of University Professors issued a similar statement this year, asking American universities not to partner with CIs.

Branded by Beijing as educational institutions teaching Chinese language and culture, CIs have been criticized as tools used by the Chinese regime for espionage and a means of influence in the host nation.

In an earlier address before a TDSB committee, Michel Juneau-Katsuya, a former senior manager with the Canadian Security Intelligence Service (CSIS), said CIs pose a threat to Canada and are used as spy agencies for the Chinese regime.

“Through many years of effort, we have now found the way to cultivate and prepare supporters for our Party,” Former CCP leader Hu Jintao once said about CIs. “This is our army for future cadets and it is our most important soft power.”

On Oct. 25, a few days ahead of the TDSB vote, Toronto Chinese Consul General Fang Li said during a banquet that the Chinese side was hopeful they could work with the new trustee board, elected on Oct. 27, to reinstate the partnership.

Fang Li’s comments came a few days after the Hunan Department of Education, which was to supply instructors and members on the advisory board of TDSB’s Confucius Institute, issued a letter to the TDSB proposing to end the partnership.

The move was seen by at least one trustee as a “face-saving measure” as it was already expected at that point that the board would end its partnership with the CI.

The TDSB also had an agreement with Hanban, the CI headquarters in China. According to TDSB chair Mari Rutka, no similar letter was received from Hanban, which is the main entity overseeing the partnership with CIs. Hanban can get agreements from other institutions in China to provide instructors for CIs in a host country.

The motion approved by the overwhelming majority of the TDSB on Oct. 29 was for the termination of the agreements with both Hanban and the Hunan Provincial Department of Education.

During his remarks at the Oct. 25 banquet, Consul General Fang Li urged Toronto’s Chinese community to voice support for CIs and convince trustees to maintain the partnership, according to a Ming Pao news report.

The banquet was hosted by the Confederation of Toronto Chinese Canadian Organizations (CTCCO) to bid farewell to Chinese Vice General Consul Dongmei Wu and welcome his replacement Chuanging Zhang.

Toronto-based lawyer Etienne told NTD that under article 55 of the Vienna Convention, manipulating and interfering with a state’s political function is completely prohibited.

Requests for comment from the Chinese Consulate were not responded to.

According to Ming Pao, CTCCO chair Chengyi Wei also called on the Chinese community to voice support for CIs and “gather round” the TDSB ahead of the Oct. 29 vote.

During the vote, both those opposing and supporting a CI in Toronto schools gathered outside the TDSB.

At least one bus brought CI supporters, who waved Chinese flags and were heard shouting in Chinese, “Long live the Chinese Communist Party” as well as remarks denouncing minority groups targeted by the CCP for repression.

In his address to the TDSB committee, former CSIS senior manager Juneau-Katsuya provided evidence that a number of groups rallying people in the Chinese community to support CIs are closely linked to CCP organizations with espionage budgets in the billions of dollars.

He presented an internal email leaked from the Beijing Association of Canada stating they urgently needed people to go to the TDSB for the committee vote, offering to pay a subsidy for transportation and parking for those who attended.

Some of the pro-CI organizations Juneau-Katsuya named with close ties to the CCP include the CTCCO; the National Congress of Chinese Canadians (NCCC) and its founder Ping Tan; the Chinese Professional Association of Canada (CPAC); and the Beijing Association of Canada.

Requests seeking interviews with the NCCC, CPAC, and the Beijing Association of Canada were not answered. The person who answered the phone at the CTCCO hung up when asked about an interview. In a past interview with Epoch Times, the NCCC denied being controlled by “any party or political force.”
With reporting by Becky Zhou