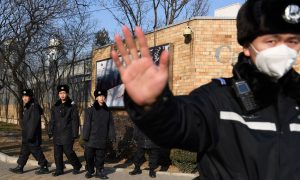 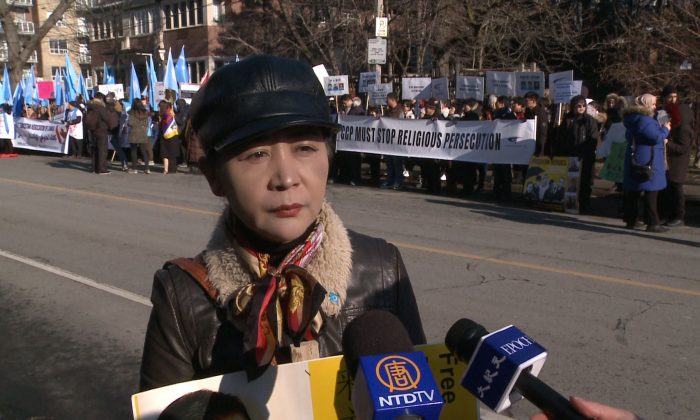 Sheng Xue of the Federation for a Democratic China speaks during a rally outside the Chinese consulate in Toronto on Jan. 4, 2019. Xue was part of the Canadian Coalition Against Communism that organized the rally, attended by around 100 people. (NTD Television)
Canada

TORONTO—A newly formed coalition of rights groups held a demonstration in front the Chinese consulate in Toronto on Jan. 4 to demand the release of Canadian citizens detained in China as well as protest the Chinese regime’s rights violations inside and outside China.

The Canadian Coalition Against Communism (CCAC) organized the demonstration to call on the regime to release Canadians that have been detained since the arrest of Huawei executive Meng Wanzhou in Canada on Dec. 1. They also shed light on human rights abuses perpetrated on minority groups in China. About 100 people attended.

“What we, as Canadians, are experiencing right now with two arrested Canadians, the Chinese government been doing to their people for years and years,” said CCAC chair Majed El Shafie in a speech, referring to Canadians Michael Kovrig and Michael Spavor.

El Shafie, also the founder of OFWI, cited human rights abuses by the Chinese regime against Falun Gong (aka Falun Dafa) adherents, Uyghurs, Tibetans, Christians, and other minority groups in China, saying they must come to an end.

A United Nations human rights panel said in August 2018 that it had received credible reports that an estimated 2 million Uyghurs and Muslim minorities are being held in internment camps for indoctrination. The Chinese regime has also been waging a brutal persecution campaign against Falun Gong adherents since 1999, resulting in unknown numbers tortured and killed.

The coalition also called on the Canadian government to take a stronger stance against the regime’s human rights transgressions.

Diplomatic tensions between Canada and China have escalated since Meng’s arrest in Vancouver at the request of the United States. U.S. prosecutors have accused Meng of misleading banks about transactions linked to Iran, and she faces fraud charges if extradited to the United States.

Kovrig and Spavor were detained shortly after Meng’s arrest. More recently, Global Affairs Canada confirmed that 13 Canadians have been detained in China, with eight released so far. Kovrig and Spavor are still detained and have been charged with endangering national security.

“We know what the communists would do to those detained, and we are worried about their safety and well-being,” Xue said in a press release,

Canada’s Foreign Affairs Minister Chrystia Freeland issued a statement on Dec. 21 describing the men’s detention as arbitrary and called for their immediate release. She also said Canada will adhere to its international legal commitments with regard to Meng’s arrest and will uphold the principle of the rule of law.

But El-Shafie was critical of Ottawa’s handling of the situation in not raising the travel warning level to China, not distancing itself from Beijing, and not recalling Canada’s ambassador to China.

“We don’t see them doing any serious stuff, any measures, in order to respond to these two Canadians,” he said.