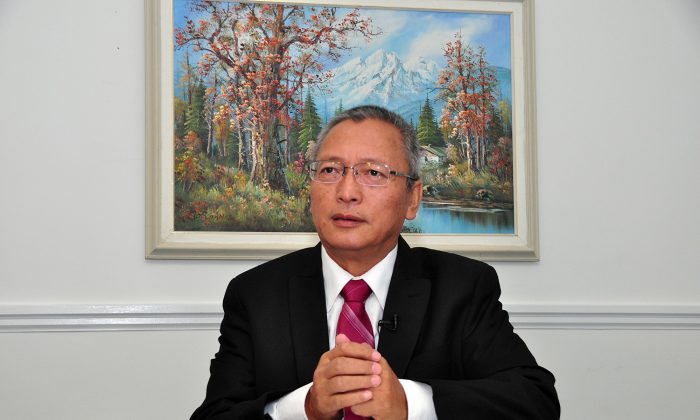 Xie Weidong, a former Supreme Court judge in China who now lives in Toronto, in a file photo. (The Epoch Times)
Canada

Xie Weidong relieved that Interpol removed him from red notice list, citing China’s request to put him on the list as ‘politically motivated’
By Omid Ghoreishi

TORONTO—After nearly a decade as a Supreme Court judge in China, Xie Weidong decided he had seen enough of the justice system under the Communist Party—at times even being told how to rule before the start of a trial—and stepped down as a judge in 2000.

Xie, a resident of Toronto who moved to Canada in 2014 and has been sponsored by his Canadian wife to become a permanent resident, is now being pursued by the same justice system he once worked for.

“I have a thorough understanding of the Chinese Communist Party’s judicial system, and this system has very serious problems. I hope that the international community can know more about it,” Xie told The Epoch Times.

Xie said he is a victim of a conspiracy by local officials in China’s Hubei Province to deprive an entrepreneur of his business—a tangled story that involves the local police force and the courts, and includes Xie’s relatives and even a Canadian citizen among those targeted, some of whom are still in custody in China.

In 2015, Xie learned that police in China had requested Interpol to put him on its red notice list on charges of corruption and accepting bribes while serving as a judge.

But last month, Interpol told Xie’s U.S.-based lawyer that it had removed him from the list, saying there was a “predominant political dimension” to China’s request.

The statement, a copy of which was seen by The Epoch Times, cited a report by Human Rights Watch (HRW) on the methods employed by Chinese authorities to force those on its wanted list to return to China, adding that in Xie’s case they considered what HRW wrote about “unjustified detentions, threats of collective punishments, restrictions of movements, and financial measures” used against him.

“All these elements contribute to a body of corroborating evidence, which reinforce and support the Applicant’s arguments regarding extra-judicial measures applied on his relatives to coerce his surrender,” Interpol’s Aug. 12 statement said. “[T]here is a significant potential … of [Interpol] being perceived as facilitating politically motivated activities.”

Xie said the red notice had also initially hindered his application for permanent residency in Canada, with authorities requesting his response to the notice and rejecting his application because it was not submitted in time.

After a Canadian court reviewed his case in 2017 and accepted his application, arguing that the charges against him propelled by China are not based on evidence, immigration officials settled the case; his sponsorship application was eventually resumed and is currently in progress.

“The sound and effective legal system in the West has protected my legitimate rights,” Xie said. “A sound legal system can correctly identify facts and effectively protect people’s legal rights because it only believes in evidence.”

He adds that his experience proves the point he has been trying to drive home since he left China’s justice system: “Such a judicial system should be severely criticized.”

According to Xie, who has become a vocal critic of China’s justice system, his ordeal originates in a civil lawsuit case in Hubei Province in the 1990s that he presided over as a Supreme Court judge.

The case involved business owner You Xiaolin, who ultimately won his lawsuit against another company, Securities Trading Department of Ping An Securities. Both the lower court and the Supreme Court ruled in You Xiaolin’s favour. Xie heard the case as part of a three-member Supreme Court panel in 1999, before resigning his post in 2000.

In another case in 2004, the Wuhan Securities Trading Department launched a lawsuit against You Xiaolin, and this time the courts ruled against him. He was put under arrest and all of his and his family’s personal and business assets were seized.

In 2005, local authorities charged You Xiaolin’s sister, You Ziqi—who immigrated to Canada in 2002 and is now a Canadian citizen—of attempting to take over her brother’s assets. Their mother, Deng Qing, alleges that the authorities made this move to prevent You Ziqi from coming back to China and reclaiming the seized property.

You Ziqi, who didn’t know she was wanted, was detained upon setting foot in China in 2014.

Xie said he is now being pursued by the local authorities so that he can be forced to testify that he accepted bribes by You Ziqi to rule in favour of her brother in 1999.

“The gangs of black and evil officials at all levels under the Chinese Communist Party’s autocracy often resort to fraudulent cases to seize private property, and then try to silence the victims,” he said. “They put my name on the Interpol’s red notice list by bribing the superior officials.”

Both Xie’s son and his sister have been detained in China, an attempt to force him to return, he said. His son, who was detained in November 2016, has been denied bail and is still in custody. His sister, detained in September 2016, is released on bail, awaiting trial.

Since his time in Canada as well, Xie said there have been a number of instances in which acquaintances have tried to have him return to China—where he fears he will be arrested and tortured—such as the time a lawyer who formerly represented his sister tried to meet with him in suspicious circumstances to push him to return.

He said such direct attempts in Canada stopped after the RCMP got involved, but he notes that efforts to get to him continue, including hearing from friends back in China who were likely coerced by the authorities to try to persuade him to go to a third country so that he could be confronted by Chinese agents there.

“The relevant documents from the Interpol red notice said that they would sentence me to life imprisonment,” Xie said. “This way, they will seal your mouth, and their goal of seizing other people’s money will be achieved.”