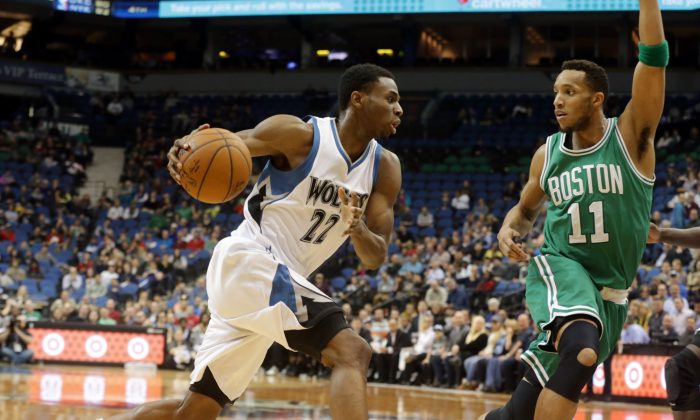 The only NBA team in Canada wants to get some Canadian players sooner rather than later.

Raptors president and general manager Masai Ujiri made the proclamation on Monday night at a forum in Ottawa.

“We are an NBA team, it’s important we look for talent everywhere, but it is on our minds to get a Canadian player or Canadian players,” Ujiri told the crowd at Canadian Interuniversity Sport’s Canadian Basketball Speakers forum, reported the Toronto Sun.

Ujiri added that he has even considered hiring someone to focus solely on Canadian players, since the growth of basketball in the country has been so big recently.

The Raptors front office includes fans of Andrew Wiggins, the No. 1 draft pick in last year’s draft that hails from Canada, although Ujiri was careful to avoid saying Wiggins name.

Ujiri was asked to pick one player other than LeBron James that he would love to have on his team. “We all know who he is, but I won’t say his name. He might be Canadian,” Ujiri said, smiling.

The Raptors currently have no Canadian players.

In their 20 year history, Toronto has only had one player from Canada.

Jamaal Magloire played for the Raptors in 2011-12. The center became the first Canadian-born player to play for the Raptors after signing a one-year deal in December 2011.

The Raptors waived Magloire early in the 2012-13 season, but soon hired him as a consultant and team ambassador.

Magloire, 36, who was once named to the All-Star team earlier in his career, is still with Toronto. He has also worked as an assistant coach for the team.

Canada as a whole has produced 23 NBA players so far, including Wiggins. 13 of these players are currently active in the association, although Steve Nash hasn’t played a game this season and is expected to retire after the season.

Wiggins is likely the best-known Canadian player at this time. Unfortunately for the Raptors, he doesn’t become a free agent for several years.

Two Canadian players are currently or soon-to-be available. Samuel Dalembert, 33, has been available since being waived by the Knicks earlier this season. And Tristan Thompson, a backup power forward/center on the Cavaliers, will be a restricted free agent this offseason after reportedly turning down a four-year, $52 million contract extension this past offseason.

Cory Joseph, a backup point guard on the Spurs; Andrew Nicholson, a backup power forward on the Magic; and Robert Sacre, a backup center on the Lakers, will be unrestricted free agents in the 2016 offseason.

Another option is through the upcoming draft, in which Toronto has its own first-round pick (it has to send its second-round pick to Atlanta from a previous trade). Trey Lyles of Kentucky seems to be the obvious choice, though he could be gone by the time Toronto picks.

Kyle Wiltjer of Gonzaga, Kenny Cherry of Baylor, and Dylan Ennis of Villanova could also go in the draft, though likely in the second round.