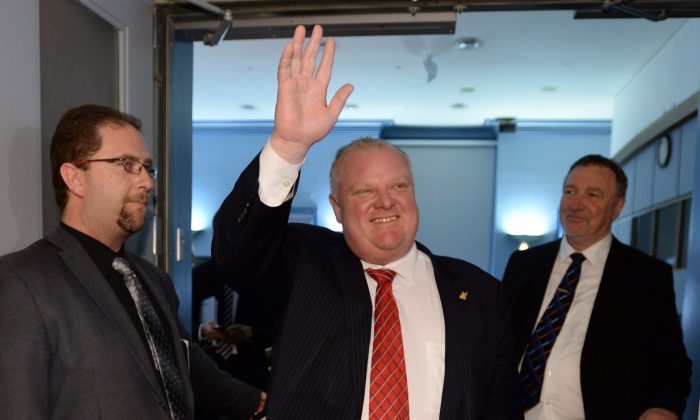 Toronto Mayor Rob Ford waves as he leaves the Big City Mayor's Meeting at Ottawa City Hall in Ottawa on Feb. 26, 2014. Toronto Police Chief Bill Blair said he is “deeply offended” by remarks Ford made about him in a videotaped profane rant. (The Canadian Press/Sean Kilpatrick)
Canada

TORONTO—Toronto Police Chief Bill Blair says he is “deeply offended” by remarks Mayor Rob Ford made about him in a videotaped profane rant.

Ford has admitted he had been drinking when he launched into a rant in Jamaican patois that was surreptitiously filmed at a Toronto restaurant.

The video in which Ford swears and references Blair and counter surveillance surfaced online weeks after Ford said he had given up alcohol.

Blair told television station CP24 that it was “disgusting” to hear the mayor at the beginning of the rant call him a “pretty filthy obscenity.”

The mayor has been under police investigation since the Toronto Star and the U.S. website Gawker reported on a video appearing to show Ford smoking crack cocaine.

Ford’s friend Alexander Lisi was charged in that investigation with drug offences—he was later also charged with extortion in relation to the so-called crack video—and police have alleged Lisi would use counter-surveillance techniques on them.

After the restaurant video was posted to YouTube, Blair said he did not respond to personal attacks.

“But don’t confuse that with I was OK with it,” he told CP24. “It was disgusting. It really was. It was disgusting. My kids saw that. My daughter heard that. People who I have worked for and protected for 37 years all heard that. I’m frankly—I think it’s shameful to have my name even associated to such behaviour.”