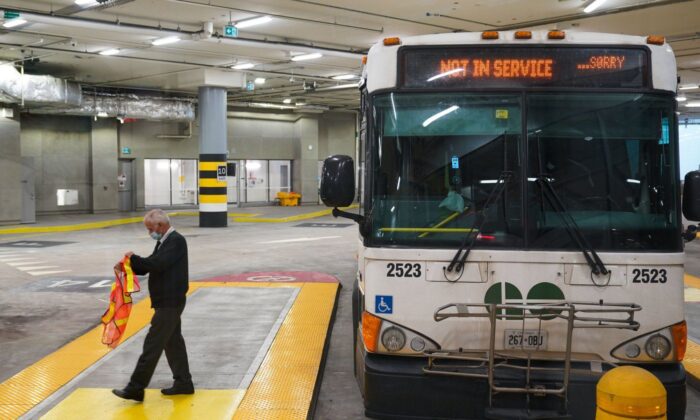 The Toronto Police are advising that they have arrested four 13-year-old boys in the alleged swarming attack of two Toronto Transit Commission (TTC) employees.

The police, in a news release issued Jan. 24, said they conducted an “extensive investigation” and reviewed TTC video surveillance footage, leading to the arrest of four male youths.

According to police, the four boys arrested were part of a larger group of youth on the bus, but only some were directly involved in the alleged assault.

Two of the 13-year-old boys have been charged with assault, and the other two were charged with two counts of assault. They are scheduled to appear in court on March 21, said police.

The Youth Criminal Justice Act does not allow the names of the juveniles to be released.

On Jan. 13, at about 3:35 p.m., police received a report that there was an altercation involving a group of boys on board a city bus in Scarborough. Two employees on the bus were physically assaulted by the boys, and a third employee, the bus driver, reportedly witnessed the event and was traumatized.

CTV News obtained security footage from a local business and published the video, which shows multiple individuals engaged in an altercation beside a bus. While police have not confirmed this is the video of the swarming, CTV reported the time stamp matches the time of the incident.

Toronto police did not immediately return requests for comment, but police constable Laura Brabant told reporters that the fight started on the bus and ended up outside on the street. The investigation is ongoing.

TTC said on social media on Jan. 23 that the attack was a “despicable swarming.”

Stuart Green, spokesperson for TTV, said the two transit operators attacked were on duty, “on their way to a relief point to pick up their vehicle and go about their shift.”

Green said the victims were “shaken up.” They received treatment from paramedics at the scene and did not require hospitalization.

In December 2022, Ken Lee, 59, died after allegedly being swarmed, beaten, and stabbed by a group of eight teenage girls for a bottle of alcohol. The girls, ranging in age from 13 to 16 years old, have been charged with second-degree murder.