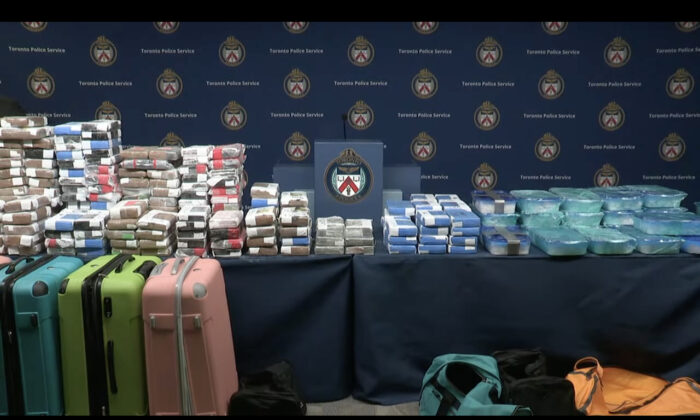 A screen of what was said to be "the largest single day seizure of illicit drugs in the history of the Toronto Police Service," exhibited during a press conference at the Toronto Police Headquarters on April 14, 2022. (Screenshot via The Epoch Times)
Canada

Toronto police say they have made the “largest single-day seizure” of illegal drugs in the service’s history.

The police seized 189 kilograms of powder cocaine along with 97 kilograms of crystal methamphetamine, with an estimated total street value of more than $28.5 million.

“While we have made large seizures before these have occurred over several months. The drugs before me were taken from one person in one day… the significance of a seizure of this size cannot be understated,” Staff Supt. Lauren Pogue said in a press conference on April 14.

Pogue said as a result of the seizure, the police have prevented possible overdoses and further criminal activity.

“As we’ve said before, violence in our city is often driven by three factors. And those are guns, gangs, and drugs. And when these factors collide, the results are often tragic,” she said.

On April 2, the Toronto police’s drug squad conducted a drug trafficking investigation in a building located in the area of Yonge Street and The Esplanade. In the underground parking of the building, the police arrested a suspect identified as 29-year-old Devante Moores who was in possession of 50 kilograms of powder cocaine at the time.

Through further investigation, a condominium unit in the building was linked to Moores, and judicial authorization was obtained to search that unit in addition to his vehicle and residence, said Inspector Mandeep Mann, the unit commander of the drug squad.

“In that unit—what we believe to be a stash house—they located an additional 139 kg of powder cocaine and 97 kg of crystal methamphetamine,” said Mann.

“We believe that stash house was used to house these drugs and then distribute to our local neighbourhoods and our surrounding communities.”

Mann said the police also seized $50,000 from the suspect’s residence.

In his vehicle, the police found a professionally built trap, which is “more than likely used to transport large amounts of drugs and very likely firearms,” Mann said.

The police said they don’t believe the suspect was working alone.

“What we’ve seen in past investigations is it’s uncommon generally to have such a young individual be entrusted with such large amounts of drugs that’s worth millions of dollars,” Mann said.

He is scheduled to appear in court on April 25, according to a news release from the Toronto Police Service.

The investigation is ongoing and police are asking the public to report any information they believe is linked to the case.