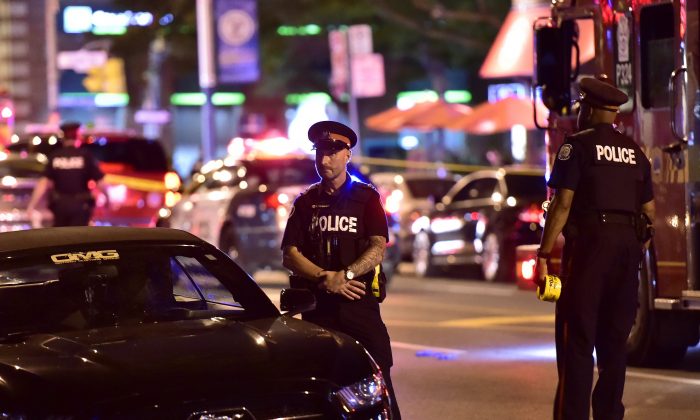 Police at the scene of a mass shooting in Toronto on July 22, 2018. (The Canadian Press/Frank Gunn)
Canada

Update: Toronto Police have confirmed a 10-year-old girl and an 18-year-old female are deceased as a result of the shooting, and 13 victims are injured and sent to the hospital. The gunman is dead.

TORONTO—Toronto Mayor John Tory says the city is in shock after a gunman opened fire on a street late on Sunday, shooting multiple people and killing two.

“I am of course angry, as we all are, that someone would carry out such an attack, which really amounts to an attack on our city itself,” Tory said at a city council meeting on Monday morning.

The shooting happened on Danforth Avenue in the city’s Greektown neighbourhood, an area filled with restaurants. The gunman shot 15 people, leaving two dead and the rest injured. The deceased include a 10-year-old girl and an 18-year-old female. Police are not releasing the names of the victims at this time.

Police later exchanged fire with the 29-year-old gunman, who was later found dead, according to Ontario’s Special Investigations Unit.

Police are now asking witnesses to come forth with any information they may have on the shooting.

“We are looking at all possible motives … and not closing any doors,” Toronto Police Chief Mark Saunders told reporters at the site of the shooting.

Prime Minister Justin Trudeau expressed his sympathy for the victims, and hoped for a full recovery of those who were injured.

“The people of Toronto are strong, resilient and brave – and we’ll be there to support you through this difficult time,” Trudeau said on Twitter.

My thoughts are with everyone affected by the terrible tragedy on the Danforth last night in Toronto, and may the injured make a full recovery. The people of Toronto are strong, resilient and brave – and we’ll be there to support you through this difficult time.

Ontario Premier Doug Ford also tweeted about the shooting, saying, “My heart goes out to the victims and loved ones of the horrific act of gun violence in Toronto.”

My heart goes out to the victims and loved ones of the horrific act of gun violence in Toronto. Thank you to all the first responders for acting quickly to help everyone affected.

Toronto has experienced a rise in gun violence in 2018, with 26 shooting deaths so far this year, an increase of 53 percent compared to the same period last year.

Our thoughts and prayers are with the victims, their loved ones and everyone affected by yesterday’s tragic incident. Thank you to our city’s first responders. #TorontoStrong pic.twitter.com/IhFLAOWPAa

Toronto is still reeling from another tragedy earlier this year, when a van drove through a crowd at a busy intersection, killing 10 people and leaving 16 injured.

With reporting by Becky Zhou, May Ning, and Emily Chian. With files from Reuters.