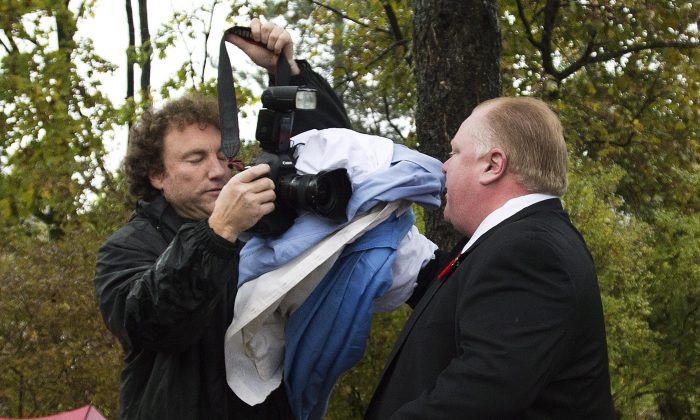 Toronto Mayor Rob Ford, right, pushes a member of the media off his property as he leaves his home in Toronto on Thursday, Oct. 31, 2013. A judge on Wednesday ordered the release of police documents in the drug case against a friend of Ford. Peter Jacobsen, a lawyer for various Canadian news organizations that pushed to release the records, said the case against Alexander Lisi involves the mayor. (AP Photo/, Nathan Denette)
Canada

Toronto Mayor Rob Ford Shoves Photographer, ‘Get off my property’

Rob Ford shoved a cameraman at his house on Thursday, as over a dozen photographers, reporters, and cameramen were outside the house seeking comment on news pictures and video that has emerged of Ford appearing to do drug deals and smoke crack.

Ford begins yelling at the people there as they ask questions and take photos of him.

“Get off my driveway!” he says repeatedly, attempting to get into his vehicle and leave his house.

Most people eventually listened, but one photographer was especially aggressive, continuing to take close-up photos and not leaving the driveway.

“What don’t you understand? Get off the property partner,” he said, shoving the photographer.

When the photographer finally moved, Ford hopped in his vehicle and left the scene, without answering any questions.

Photos and a video emerged on Thursday of Ford appearing to smoke crack and do drug deals.

At least one elected official is calling for him to step down as mayor.