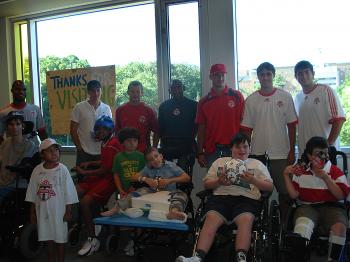 TORONTO—Six members of Toronto FC, Canada’s Major League Soccer (MLS) team, visited a local children’s hospital to inspire children only to find that they were the ones who were inspired.

“These kids are just really a bright spot on Earth, said forward Chad Barrett who was impressed by the children’s optimism and resilience.  “ I have so much respect coming here.”

The soccer players came to meet with the children and sign autographs at the Bloorview Kids Rehab, the largest rehabilitation hospital for children with disabilities in Canada last Tuesday.

After seeing the hardships the young patients faced, Barett and his teammates learned to better appreciate how lucky they are.

Goalkeeper Brian Edwards also left Bloorview with a feeling of greater strength. “I’ll think about this before I go to bed at night.  It’s a special feeling all the way around.”

But the visit was ultimately a highlight for the kids who had been having a countdown to the visit with many looking up players and wearing the red and white colors of Toronto FC.  Many of the therapists also tried to make soccer part of their treatment program whenever possible.

“They’ve been so excited all day and you can see when the players walked into the room. They’re just really excited, whether they’re soccer fans or just know about soccer, they’re all excited to meet someone who has come here just to meet them,” said child-life specialist Breanne Mathers.

“It’s a very special experience for them.”

“This was an opportunity for the kids to have a more positive experience after dealing with trauma, and something exciting to impress their friends at home with,” said Mathers.

For Mike Box, a former athlete who was nearing the end of his stay at Bloorview, this visit had a particularly special significance. “It shows us that people out there care and they’re coming in and showing their respects towards us and we’re respecting them back.”

This was not the first time that Toronto FC visited Bloorview. After a visit with his fellow team last year, Danny Dichio was so impressed that he auctioned the boots with which he scored Toronto FC’s first goal and donated the $11,800 to Bloorview.

Since its inception in 2005, Toronto FC has been actively involved with helping disadvantaged children in Canada and abroad. With KidSport Ontario and Right To Play as its partner charities, Toronto FC soccer players also support activities in schools, soccer clubs and fundraisers throughout the year.

“It’s just important for us to give back after they give so much to us. These guys are the ones who watch us on TV and have our player cards. They’re the only reason that Toronto has an organization that we’re able to play,” said Brian Edwards who then emphasized, “Giving back to the community is such an important part of being professional.”

But ultimately it’s all about the children.

“There’s nothing better to do than to help these kids, share some time with these kids. It’s really a pleasure to be here,” concluded defender Marco Velez.