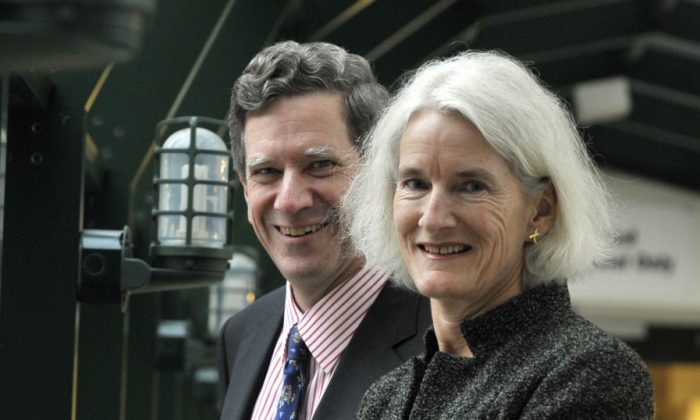 Philanthropists Jamie and Patsy Anderson will receive the 2012 Award for Outstanding Volunteer Fundraiser presented by the Association of Fundraising Professionals in Vancouver on March 31, 2012. (J.P. Moczulski)
Canada

TORONTO—For Toronto couple Jamie and Patsy Anderson, giving and contributing to the community began at an early age.

“We have been very fortunate in our own lives and we are both from families where our parents have been community volunteers. It came very naturally, it was something we enjoyed doing and it really enriches our own lives,” says Mrs. Anderson.

The Andersons will be awarded the 2012 Award for Outstanding Volunteer Fundraiser by the Association of Fundraising Professionals (AFP) in March. They will receive the honour at a special ceremony in Vancouver during AFP’s 49th International Conference on Fundraising, the largest gathering of fundraisers in the world.

The story of philanthropic involvement and volunteering for the couple began 25 years ago. In his twenties, Mr. Anderson found an interest in the Outward Bound non-profit organization that leads youth in outdoor experiential education, and decided to volunteer and get involved.

He loved “the spirit of their schools” and “their view to help people conquer all sorts of personal challenges,” says Mrs. Anderson.

Also for a number of years Mr. Anderson, who is a deputy chairman of RBC Capital Markets, served as a member of the gifts cabinet of the United Way in Toronto.

His most rewarding involvement, however, was at the Centre for Addiction and Mental Health (CAMH).

Mr. Anderson was inspired to join the centre after his friend and colleague, former Canadian Ambassador to the U.S. Michael Wilson, approached him and asked for support after losing a son to depression.

“In 1999, at a time when few business leaders were willing to step forward and advocate for mental health, both Andersons joined the $10 million Centred on Hope Campaign in support of the Centre for Addiction and Mental Health (CAMH), Canada’s largest psychiatric and addictions hospital,” says the AFP.

Later when Mr. Anderson became the chair of the centre’s board of trustees, CAMH raised $108 million in six years through its Transforming Lives campaign under his leadership.

“He’s a very successful businessman. He’s had a very fortunate career and he has a desire and a drive to give back to the community,” says Mrs. Anderson about her husband.

Mrs. Anderson has a lengthy portfolio of volunteer work herself. While at home with young children, she was asked by a neighbour to write a report for an issue at the Roy Thomson Hall and was then asked to join the venue’s board.

Involvement at SickKids Hospital was a “natural fit” for Mrs. Anderson since one of her children was a long-term patient at the hospital.

In 2001, she joined the board of directors for the SickKids Foundation where she led and recruited other volunteers and helped increase the donor base by 60 percent.

She has also been on the board of SickKids Hospital for eight years and was part of the $200 million dollar campaign for the construction of a Research & Learning Tower.

Donating on average of 15 hours a week for her philanthropic leadership role at SickKids Foundation, Mrs. Anderson says the causes she has dedicated herself to continue to motivate her to contribute.

“The psychic rewards are fantastic. … The more you get involved in these amazing causes, the more you choose to donate yourself,” she says.

Mrs. Anderson is also the chair of the Aldeburgh Connection, an arts organization that supports classical musicians.

“There are many common principles in philanthropic work that go across these sectors,” Mrs. Anderson says. “I think you need to have a passion for the story of the organization in order to maximize your impact.”

The AFP Outstanding Volunteer Fundraiser award recognizes people who demonstrate “outstanding skills in coordinating and motivating groups of volunteers for fundraising projects for the benefit of charitable institutions.”

The Andersons will be receiving their honour on March 31.

Mrs. Anderson says that they weren’t even aware of their nomination and that they were very pleasantly surprised when they found out.

“The first [time] we heard was [when] we had won,” says Mrs. Anderson. “We have accepted the award and hope that it inspires others to get involved themselves.”

Mrs. Anderson says philanthropic work for organizations like SickKids and the CAMH involve a lot of volunteers and donors, and the best part for her is that many Torontonians realize that both organizations play an important role in the community.

“I think that Torontonians have decided that they’re very proud to have the best hospital in the world here and that when they’re in the worst situation in their lives and need global expertise for their children, you know it’s right downtown.”