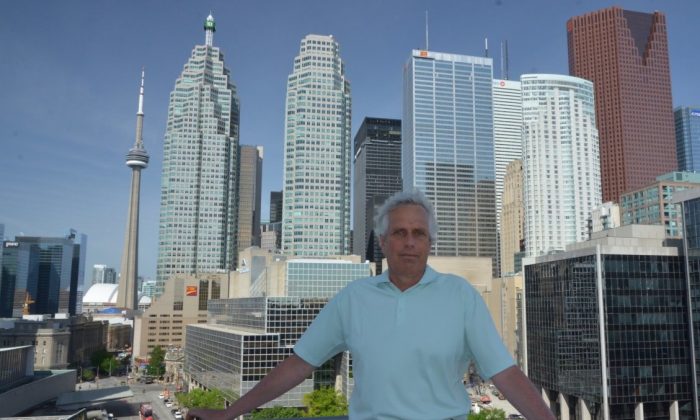 Hanging out for an hour with Charles Stuart feels like drinking an entire coffee mug of gin while watching a washing machine full of soaking $1,000 bills swirl around in front of you. The machine is locked because it’s cycling. Who will be around when it’s time to hand out all that clean money?

There’s a line-up. There’s a homeowner, a builder, a member of the municipal government, and a member of the provincial and federal governments, too. Next to each one of them is the banker they are indebted to. Every step of the way a bank says yes, or no. At every step a banker gets paid. Everyone else can lose but those guys.

He’s the uber bean counter—generator of pro forma financial statements, buyer and seller of swaths of land over which he has carefully constructed a spreadsheet of possibility, detailing every step of a project from initial investment to the reaping of profit.

Stuart’s projections not only help developers decide whether a project will make money, they also determine whether it will make enough for a bank to want in. In the biz they call this product positioning and pricing, strategic land marketing, deal structuring, and feasibility.

Stuart understands what will come to the new and resale condominium market in seven or eight years because he’s working on the projections for those projects right now—just a quiet guy sitting in an office with his fingers on the pulse of Toronto’s condo market.

“The fundamental underpinning of the Toronto condominium market is rental. The condo market is the de facto rental market,” says Stuart.

Many have built their careers on the fact that we basically no longer build rental housing anymore. Why?

“The banks don’t really lend on residential rental at the development stage,” says Stuart. In other words, not enough profit fast enough for banks to be interested.

With vacancy rates predicted to stay around 1.8 percent next year, and 90,000 migrants entering Toronto last year as an annual indicator, it seems unlikely individual investors will have difficulty renting out the units delivered over the next two years.

To further push us to new heights, land scarcity due to our inconvenient but necessary green belt legislation has driven the price of ground-based housing sky high. According to TREB, April 2014 resale prices were up over 10 percent from last year, with scarcity of listings cited as a key factor.

Stuart recalls the 80s when most of the housing built in the GTA above 40,000 units was single-family detached homes. Last year only 9,990 detached homes were constructed. “We’ve almost removed one type of supply,” Stuart notes.

Twenty-fourteen will mark the paradigm shift as the 28,000 condo units sold in 2011 are delivered.

“We are at a point of change in the market,” says Stuart. “The next two years will be pivotal in seeing the direction of the market, whether those fundamentals hold solid. … If we see a rental market decline we’ve got a serious problem.”

Since we are experiencing moderate economic recovery and our unemployment rate at 7.8 percent, we can shelve that concern for a brief tick.

“The biggest threat to our real estate market is interest rates,” Stuart says.

Not for us John and Jane Q. Public, for developers who borrow millions, municipalities that owe millions, nor the province, which owes billions.

But one wonders: if our interest rates are inextricably tied to those in the U.S., can the Americans afford to raise them? Can the Chinese risk dumping their bonds? Probably not right now.

But considering how competitive the market is, Stuart doubts we’ll see an explosion of condo openings this year.

“I think it will hover around the same because there’s uncertainty and apprehension on behalf of the development community. There are over 400 projects in the GTA right now—twice as many as there were 10 years ago. I know that from the land market,” he says.

Sales of land for high-rise, especially outside the downtown, are slow.

“Certain projects and neighbourhoods are selling very well,” Stuart explains, but those are safe bets, projects investors like, all downtown and near the subway, guaranteed to sell well.

Why? Stuart feels that outside the downtown core the total development charges are too high and costs to build are just as high when you have to provide parking, but the investors are disinterested in areas like Scarborough or Markham. Only townhouse condos for end users will sell. Condo apartments aren’t selling that well outside A-plus locations.

If more affordable condos for end users are what the city wants, Stuart poses a question: “Why is Scarborough City Centre, a much poorer area, paying the same development charge as Yonge and Bloor?”

As a resident of Scarborough, I’m wondering if we will ever get our LRT or subway (we’d be happy with anything at this point) if we can’t attract builders who bring needed housing that in turn attracts the poor suckers who will tack the development charges on to their mortgages that will eventually fund reasonable transit infrastructure.

So this is a wait-and-see year for many. Wait by the washing machine and see who gets paid—and who gets wet.