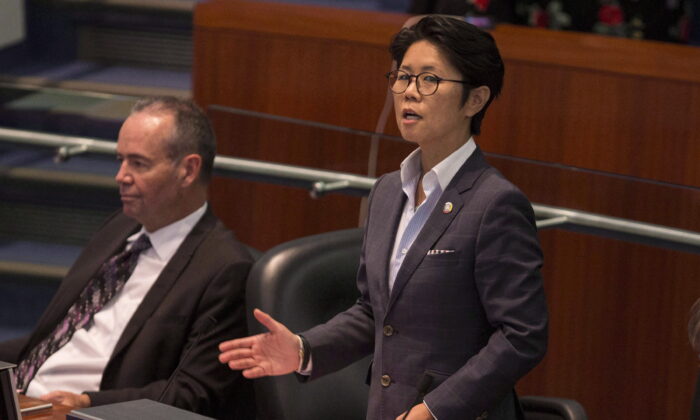 Toronto City Councillor Kristyn Wong-Tam says she won’t be extending her role as vice-chair of the Toronto Board of Health when her appointment ends next month.

Her announcement comes after she received criticism over an op-ed she published in the Toronto Sun on Nov. 18, urging “discourse over divisiveness” in regards to COVID-19 vaccinations.

“When I wrote an opinion article last week, it was a genuine effort to promote dialogue and civility in an increasingly polarized debate over public health measures during the pandemic,” Wong-Tam wrote in a statement on Nov. 22.

But the councillor faced criticism on social media when she stated in the piece that people who are vaccinated “can still get COVID-19 and can still transmit it to others just as easily as those who are unvaccinated.”

“In addition, Ontario’s chief medical officer Kieran Moore has stated that natural immunity needs to be considered as a factor in the province’s reopening plan,” Wong-Tam, who is fully vaccinated, wrote in the article, stressing that a “one-size-fits-all approach” to vaccination doesn’t work.

“So why are we at such odds with people who have drawn different conclusions than we have? Some of us are even apart from those we love.”

Wong-Tam’s views attracted both supportive and critical comments on social media. A typical positive post commended her for exercising “good judgement and thoughtfulness,” while a typical negative post accused her of spreading “misinformation,” that was “inexcusable from the vice-chair of the Board of Health.”

In a tweet on Nov. 20, Wong-Tam said Moore had sent a memo to public health officials on Aug. 31, citing “fully vaccinated individuals have similar levels of infectiousness as in unvaccinated cases.”

“If this information is wrong or incomplete, it should be clarified soon,” she wrote on Twitter.

But she continued to face criticism for being “incredibly misleading” and having “misconstrued” the information in the memo.

In her statement on Nov. 22, Wong-Tam said she “unfortunately made an honest mistake” with the information from the August memo.

“That memo is outdated and the context in which I shared it was misleading and left the wrong impression,” she wrote.

“In short, I believe the scientific evidence is clear: vaccinations are an essential tool in ending the pandemic. Everyone who is able should get their shot. The more vaccinated people we have, the less transmission we have.”

Wong-Tam maintained that unvaccinated individuals should be treated with respect and without discrimination.

“Not everyone who has delayed getting the vaccine is a rabid ‘anti-vaxxer.’ People who have genuine concerns should be treated with respect, not disdain. Yelling at each other does not help,” she said.

The vice-chair also said she is “honestly conflicted” about vaccine mandates.

“I want to do everything we can to protect essential public services while recognizing that BIPOC communities are broadly represented in those who are unvaccinated,” she said.