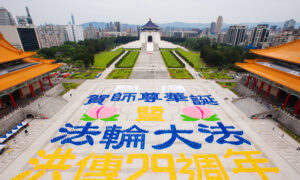 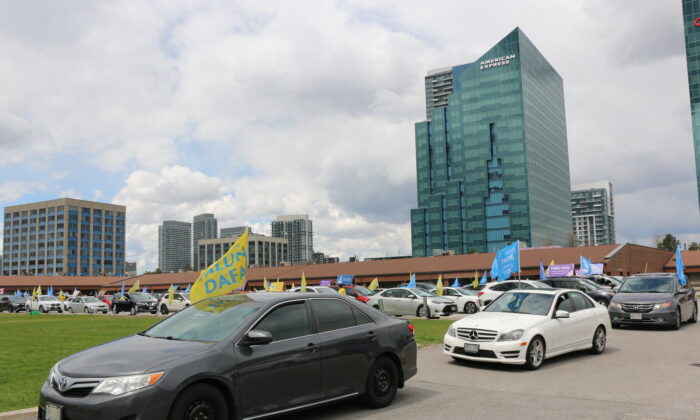 A car parade with over 100 vehicles drove across Greater Toronto to celebrate the 29th anniversary of the introduction of Falun Dafa to the public, in Toronto, Canada, on May 8, 2021. (Andrew Chen/The Epoch Times)
Canada

A car parade of over 100 vehicles drove across Greater Toronto over the weekend, celebrating the 29th anniversary of the introduction of Falun Dafa to the public.

Falun Dafa, also known as Falun Gong, is a spiritual practice that consists of five meditative exercises and moral teachings based on the core tenets of “truthfulness, compassion, forbearance,” according to its website. The practice was first introduced to the public in China and gained popularity in the 1990s. Practitioners gather annually across the globe to wish the founder of the practice, Li Hongzhi, a happy birthday on May 13th.

One of the event organizers, Jeff Jiang, told the Epoch Times that at least 120 vehicles were registered online for the car parade in Toronto, with an estimated 300 participants.

Helen Dhieu, a Vietnamese immigrant and a resident of Hamilton, said many countries in the world are now celebrating May 13th as the official Falun Dafa Day. She noted that the Niagara Falls City Hall—along with over ten other jurisdictions across Canada— raised a flag on May 7 ahead of the celebration that says “Falun Dafa Day.”

“I just want everyone first to know about Falun Dafa, how good it is, because it’s the best body and mind cultivation,” Dhieu told The Epoch Times.

Masi Khosravi, an Iranian immigrant who attended the car parade with her husband, Moe Esmaeili, said the practice had rid her of bad health and depression.

“I was in bad health, I had back aches, I was depressed … and I had questions for my life,” Khosravi, who started practicing Falun Dafa in 2001, told The Epoch Times. “When I found Falun Dafa, after doing the exercises, I found it’s so energetic, I found something good, good energy in this practice.”

Omar Tuzovic, a resident of Scarborough, said the car parade is more than a celebration of the practice, but it also raises awareness among Canadians of the persecution against Falun Gong and its adherents in China.

“Today’s event is a celebration of Falun Dafa Day, it’s showing people what Falun Dafa is, and bringing people to understand the persecution that’s going on in China,” Tuzovic told The Epoch Times. “I think if people know about Falun Dafa, they could slowly know about what’s happening in China.”

According to the Chinese regime’s official estimation, around 70 million to 100 million people in China were practicing Falun Gong by the late 1990s. Jiang Zemin, the former leader of the Chinese Communist Party (CCP), had perceived Falun Gong’s presence as a threat to the Party’s rule, and launched an unprecedented campaign to eradicate the practice in 1999. The persecution continues to this day.

Meanwhile, with Beijing’s increasing control over Hong Kong, civil rights advocates have expressed concerns about Falun Gong adherents in the region facing growing threats. Last June, Beijing passed the national security law, giving it the power to target individuals—including those who reside outside of Hong Kong—for any acts interpreted by the CCP as secession, subversion, terrorism, and collusion with foreign forces.

“We are practicing ‘Truthfulness, Compassion, and Forbearance,’ why [the Chinese] government should persecute these people? The only reason can be this government is [an] evil government,” Esmaeili said. “And we want to share with Canadians, and say to them that … say ‘no’ to CCP.”

Dhieu said the CCP’s persecution of Falun Gong is an act against humanity, and it’ now pushing its draconian campaign in Hong Kong, where Falun Gong adherents were previously given more freedom to practice their beliefs.

“Communist itself is wrong, and the communist party is cruel,” Dhieu said. “People have the rights, [and] have the freedom to practice whatever they believe in.”