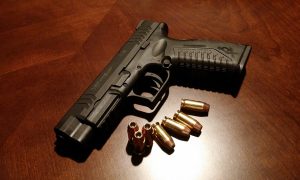 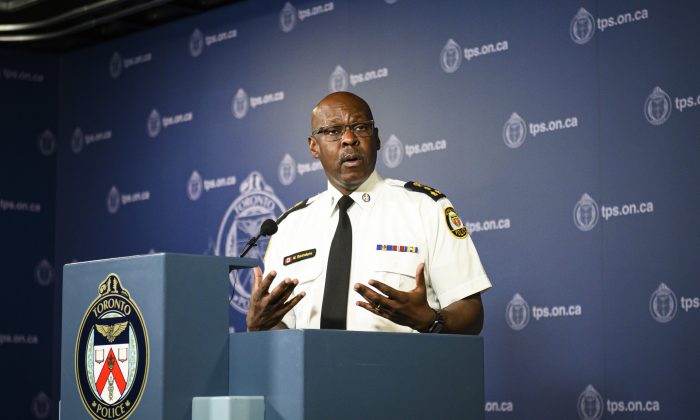 The Toronto Police Service is increasing efforts to reduce the amount of gun violence in the city after a recent spike in violent shootings left a considerable number of people injured.

Over the Civic Holiday long weekend from Aug. 3 to Aug. 5, 17 people were shot in Toronto, including 7 who were the victims of a shooting at a nightclub.

There were over 14 incidents in locations ranging from Liberty Village to Lawrence Avenue in the city’s east end, and even stretched to the exclusive upper-class neighbourhood of Bridle Path, where a man was taken to hospital for life-threatening gun injuries. There were no reported fatalities.

Toronto Police Chief Mark Saunders said on Monday that the TPS will put a strong focus on suppressing gun violence.

“When I’ve got 13 people right now in the city that have been shot, that have a bullet in them, I’ve got concerns for that,” Saunders said at a news conference. “We will be putting additional resources in specific places that we think will help deter and reduce the gun violence that’s occurring in the city right now.”

Four more people were shot less than 24 hours after the news conference.

In a previous news conference on the Friday before the long weekend, Saunders said the spike in gun violence in the city could be linked to street gangs. The incidents “by and large have street gang connotations to them” he said, and adding that the TPS will shift their attention more toward gang violence in their new approach to gun control.

“We are optimistic about some of the ongoing investigations,” he said. “We’ll definitely be making more arrests.”

I appreciated hearing directly from families and communities most affected by gun violence this week. We will continue to listen and to work together. The @TorontoPolice are committed to helping these communities by growing our relationships and building trust. #Toronto

According to the latest update in the data on the Toronto Police Service’s website, the city has seen 267 shootings this year so far, with a total of 401 victims affected. In comparison, there were 253 shootings by the same date in 2018.

To help fight the rise in gun violence, the federal, provincial, and municipal governments have agreed to each fund the Toronto Police Service to the tune of $1.5 million each, for a combined total of $4.5 million.

Mayor John Tory announced the decision on Monday. In a statement on Twitter, he called the shooting incidents both “deeply troubling” and “absolutely unacceptable,” and reiterated the federal government’s commitment to stopping gun violence.

The funds will be used to support general police efforts toward ensuring safety in communities and combat the violent activities of the city’s street gangs.

Tory said that he is continuing to speak to the provincial and federal levels of government to “address the roots of violence” as well as advocate for stricter laws to increase gun control in Canada.

“I want to thank the provincial and federal governments for joining with the City of Toronto to take immediate action,” he said in the statement. “These additional resources for our Toronto Police Service will fund an even more intensive focus on those responsible for inflicting gun violence on our neighbourhoods as well as increasing police presence to keep communities safe.”

Chief Saunders confirmed the funding, saying that he “welcomes” the decision. He also said that the TPS is currently working on a comprehensive plan to address gun violence in the city.

“Together we will create safer spaces,” he tweeted.

Ontario Solicitor General and MPP Sylvia Jones, who was an active part of the discussions between the three levels of government, expressed her support for the funding on Twitter.

We’re committed to working with the @cityoftoronto & the @TorontoPolice to keep the people of #Toronto safe. That’s why we’re ensuring that a portion of our $25M investment to fight guns & gangs in Toronto is directed to put boots on the ground now where they are needed most. https://t.co/mOMyc9MYhH