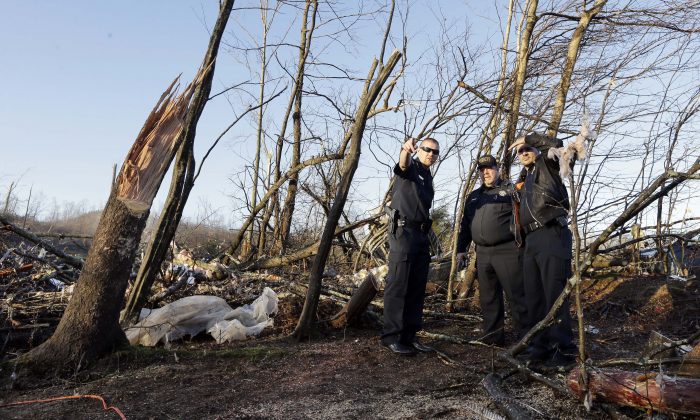 Members of the Perry County Sheriff's Department look over the site where Antonio Yzaguirre, 70, and his wife, Ann Yzaguirre, 69, were found dead, near Linden, Tenn., Thursday, Dec. 24, 2015. Several people were killed in Mississippi, Tennessee and Arkansas as spring-like storms mixed with unseasonably warm weather spawned rare Christmastime tornadoes in the South. (AP Photo/Mark Humphrey)
US

Videos show massive tornadoes in Mississippi
By The Associated Press

HOLLY SPRINGS, Miss.  — Bobby Watkins and his wife huddled beneath their old oak dining table for shelter as storm winds roaring outside their Mississippi home tossed a barn onto their truck outside, tore the steeple off a nearby church and reduced a neighboring building to rubble.

UPDATE: At least 9 killed in storms and tornadoes across the south, including 7-year-old. https://t.co/Us2brB9bVt pic.twitter.com/cvPIGIuviO

“Santa brought us a good one, didn’t he?” Watkins said Thursday as the couple took a Christmas Eve stroll amid the destruction in rural Benton County, Mississippi. “I may have lost some stuff, but I got my life.”

Others were less fortunate. At least 10 people were killed in Mississippi, Tennessee and Arkansas as spring-like storms mixed with unseasonably warm weather and spawned rare Christmastime tornadoes in the South. Emergency officials blamed the severe weather for injuring scores of others Wednesday and destroying dozens of cars, homes and businesses.

The threat of tornadoes eased as the line of storms moved east Thursday and brought heavy rain and thunderstorms to Atlanta and the Carolinas. In the worst-hit communities, search parties hunted for missing people and volunteers helped clear debris on a day often reserved for gift wrapping and last-minute shopping.

In Linden, Tennessee, Chris Shupiery wore a Santa hat as he cut fallen trees with a chain saw not far from a home in which two people died in the storm.

“I figured I’d come down here with my hat,” Shupiery said. “I’ve been wearing it for Christmas, and this was just the right thing to do, come help a family in need. Suit up, try to cheer people up, and try to make them feel a little better with Christmas coming around.”

From Alabama to New York, much of the country felt unusually warm temperatures in the 70s on Christmas Eve and thousands were without power from Mississippi to Michigan. Pounding rains Thursday were blamed for a mudslide that buried a mountain road in north Georgia and for flooding a movie theater in the city of LaGrange. Portions of southeast Alabama got doused with rainfall totaling 10 inches or more, flooding dozens of roads and forcing holiday travelers to take detours.

The storms killed at least six in Mississippi, including a 7-year-old boy in Holly Springs who died when the storm picked up and tossed the car he was in, officials said. Three were killed in Tennessee and one in Arkansas.

Mississippi Emergency Management Agency spokesman Greg Flynn said the state had at least 40 injuries, some serious. He said early information suggested a large tornado that touched down near Clarksdale traveled more than 100 miles in a line toward Tennessee.

Searches for missing people were complicated by the fact that many people were traveling for the holidays, Flynn said, though he vowed search teams were making every effort.

“Until they know for sure where those folks are, they’re going to keep looking because we’ve had in some cases houses leveled, and they’re just not there anymore,” Flynn said.

Mulester Johnson was with relatives when a fierce storm roared through Holly Springs and tore the back of his house from its foundation, tossed trees onto pickup trucks and leveled brick walls.

On Wednesday night, he opened the door to what had been a bedroom and looked past his disheveled belongings to clusters of broken trees in the backyard. The room’s walls had been blown away.

“This right here is a mess, but I can’t complain because we’re blessed,” he said.

Luckily, no one was injured.

Along Mississippi Highway 7 close to Johnson’s house, headlights from passing cars illuminated downed tree limbs, slabs of plasterboard and wooden beams that had been turned into projectiles.

Pieces of metal tangled in drooping power lines, dangling precariously alongside the road. The smell of freshly overturned dirt and trees lingered in the air as emergency crews tended to downed lines.

Sean Wagner, an amateur storm chaser, shot video of a tornado in Holly Springs and said he had to warn two families that had stopped under an overpass.

“I got out of my car and told the families they weren’t safe, I showed them my radar, it showed that they were close to the path of the tornado. I told them to leave because if I was there as a storm chaser, it wasn’t safe,” he said.

In Benton County, Mississippi, where at least four deaths occurred and people were missing, crews searched house-by-house to make sure residents were accounted for.

The threat of severe weather just before Christmas is unusual, but not unprecedented, said Greg Carbin, a meteorologist at the national Storm Prediction Center. Exactly a year ago, twisters hit southeast Mississippi, killing five people and injuring dozens of others.