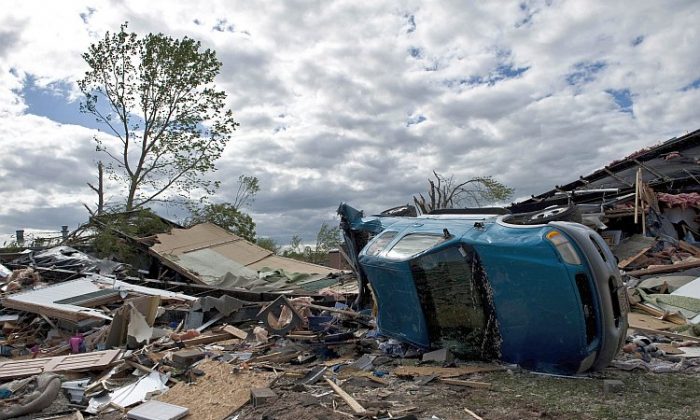 Damage is seen after an EF3 tornado swept through the Pinaire Mobile Home Park on April 15 in Wichita, Kan. The storms were part of a massive system that affected areas from Northern Nebraska and Iowa south through Oklahoma. (Julie Denesha/Getty Images)
US

Large portions of the Midwest, Plains, and Upper Mississippi River Valley were threatened by severe weather on Sunday, as tornado watches were in effect through the evening in Minnesota, Wisconsin, Iowa, and Arkansas. Reports of tornadoes touching down also occurred in Kansas, Nebraska, Missouri, and Oklahoma, where at least 5 people have died and 29 were injured as twisters damaged homes, businesses, a mobile home park, a hospital, and other buildings.

The tornadoes were the byproduct of an expansive storm system that impacted the Midwest early Sunday, producing not only twisters but lightning, hail, and severe downpours as well.

State emergency officials in Oklahoma reported that 5 people were killed when a tornado touched down at 12:18 a.m. on Sunday, near the town of Woodward, a community of about 12,000 located 140 miles northwest of the state capital of Oklahoma City. Residents, rescue workers, and volunteers searched through the debris and wreckage afterward, looking to salvage belongings and rescue those still trapped or injured in the rubble.

Highlighting the significance of the unusually severe weather events, the National Weather Service’s Storm Prediction Center, located in Norman, Okla., issued a warning of a “high-risk, life-threatening event” more than a day before the tornadoes touched down. It was only the second time in history that the Storm Prediction Center had issued a warning in this manner, with the first occurring on April 6, 2006, before deadly tornadoes swept through the Southeastern U.S.

Oklahoma Gov. Mary Fallin issued a state of emergency in her state on Sunday, and publicly mourned the loss of life in a released statement.

“My thoughts and prayers go out to those families who have lost loved ones or seen their homes destroyed,” said the Republican governor. “The state of Oklahoma is currently doing everything it can to provide relief to the communities in the path of last night’s storms and tornadoes.

“We will continue to work to provide every bit of assistance that we can in the coming days,” she added.

In Kansas, Gov. Sam Brownback also declared a state of disaster emergency early Sunday, and was relieved that his state had suffered no fatalities from the day’s severe weather. Brownback also credited the storm warnings with saving Kansan lives, as residents heeded the warning and took cover in their homes.

According to the National Oceanic and Atmospheric Administration (NOAA), tornadoes occur in many parts of the world, but are especially common in the United States east of the Rocky Mountains during spring and summer. In an average year, there are usually about 800 reported tornadoes nationwide, resulting in approximately 80 deaths and 1,500 people injured.

Weather dangers that often accompany tornadoes include flash floods, lightning, damaging straight-line winds, and large hail, which can reach the size of a grapefruit.

In the event a tornado warning is issued for a particular region, the National Weather Service advises that people who are already indoors should seek shelter in a predesignated area, such as a basement, or interior rooms and hallways on the lowest floor if a basement is not available. Residents should take cover behind a sturdy piece of furniture and stay away from windows.

People in automobiles should abandon their vehicles immediately in the event of a tornado warning, and should not try to outrun the tornado in their vehicle. Mobile homes do not offer adequate protection against a tornado and should also be abandoned.