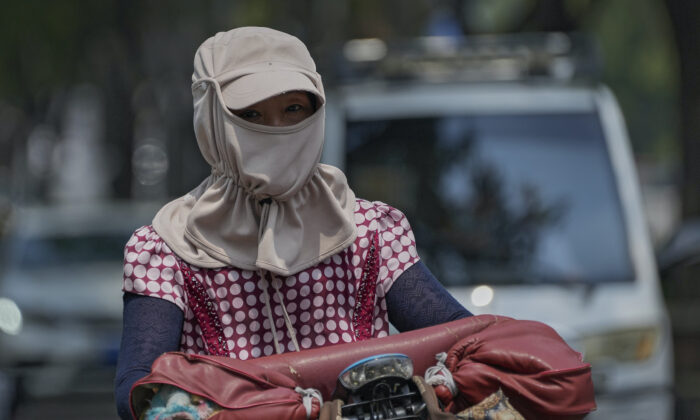 A woman wearing a sun protection clothing rides on a bike on a street in Beijing, on July 21, 2022. (Andy Wong/AP Photo)
China

BEIJING—A tornado blew through 11 villages in a farming region of eastern China, damaging homes, killing at least one person and injuring 25 others, while swaths of the country face extreme heat.

The homes and property of more than 2,000 people were damaged when the twister struck Wednesday in Jiangsu province south of Beijing.

Tornadoes are relatively rare in China, although 12 people were killed and more than 300 injured in Jiangsu and the central city of Wuhan by tornadoes last year. China’s most violent tornado in recent decades killed 98 and injured more than 800 in Jiangsu in 2016.

As with much of the northern hemisphere, parts of China have seen record-high temperatures this summer and unusually heavy rainfall is exacerbating seasonal flooding.

Temperatures as high as 43 Celsius (109 Fahrenheit) were forecast until the end of the month for a broad swath of China, from the far northwestern Xinjiang region bordering on Central Asia to the central cities of Changsha and Nanchang and the metropolis of Fuzhou on the southeast coast opposite Taiwan.

No figures have been released on heat-related deaths.