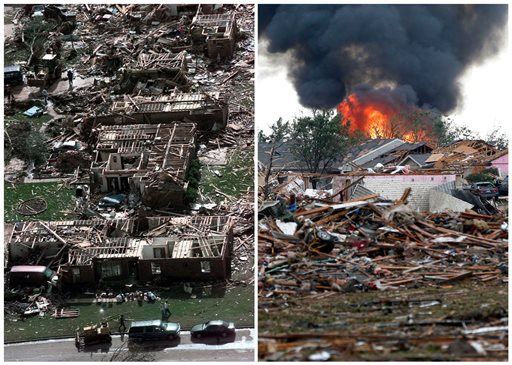 Left, a neighborhood in Moore, Okla., in ruins on Tuesday, May 4, 1999, after a tornado flattened many houses and buildings in central Oklahoma, and right, flattened houses in Moore on Monday, May 20, 2013. Monday's powerful tornado in suburban Oklahoma City loosely followed the path of a killer twister that slammed the region in May 1999. (AP Photo)
Special

Tornado in Oklahoma ‘Worst tornado in the history of the world’? (+Video)

Wind speed and size bad, time on ground was the worst
By Zachary Stieber

A tornado tore through Moore, Oklahoma, a suburb of Oklahoma City, on May 20, reaching wind speeds of up to 200 miles per hour, flattening entire neighborhoods, and destroying Briarwood Elementary School. The death toll has reached 51, according to local broadcaster News 9, and officials expect the toll to rise as search and rescue teams continue looking for survivors. Another several hundred are trapped by debris at another elementary school.

UPDATE: The official death toll was revised down by authorities on Tuesday to 24, including 9 children.

The tornado is being called one of the worst to hit the entire country, ever. A meteorologist for local broadcaster KFOR-TV, meanwhile, called it “The worst tornado in the history of the world.”

Though the Moore tornado wasn’t the biggest, longest, or most destructive, the combination of its speed, size, and strength does make it a stunningly destructive storm, according to Smithsonian Magazine.

Maximum size for tornadoes is about two and a half miles in width. The Moore tornado was between a half-mile and a mile wide. And it had wind speeds of up to 200 miles per hour. But perhaps the most potent element was the time on ground—approximately 40 minutes, after taking about 16 minutes to develop.

The powerful Moore tornado has already claimed at least 51 lives and left several hundred others injured; also, tens of thousands of others in or near the city of almost 60,000 have had their lives dramatically shifted.

In May 1999 a tornado clocking wind speeds of 300 miles per hour and at least a half-mile wide went on pretty much the same path as the May 20, 2013 tornado.

The 1999 “Great Plains Tornado Outbreak” produced many large and damaging tornadoes in central Oklahoma on May 3 and May 4 of that year, killing 40 people and injuring 675 others. A total damage estimate was $1.3 billion, adjusted for inflation, making it the fourth costliest hurricane since the National Weather Center started keeping track of tornadoes in.

Both the 1999 and 2013 tornadoes tore northeast into Moore, though the paths became different later as the 2013 one veered east while the 1999 one shifted more north than east (see photo).