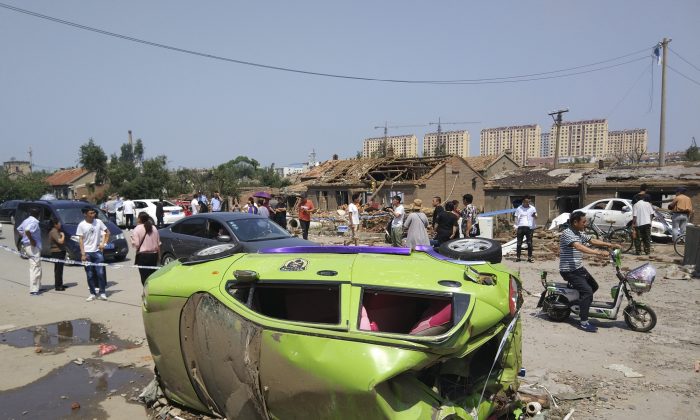 Residents past by an overturned car in the aftermath of a tornado in Kaiyuan in northeastern China's Liaoning Province on July 4, 2019. A tornado blew through the city in northeast China, damaging factories and buildings, killing some people and injuring others, state media reported. (Chinatopix Via AP)
Social Issues

The tornado hit Kaiyuan, a county-level city in Liaoning Province, late Wednesday afternoon, local authorities said in a brief online statement. Footage from state broadcaster CCTV showed a stretch of collapsed low-rise buildings where firefighters were working through the debris. Glass windows in homes and cars were blown out.

Liaoning resident Li Yuan said he owns a factory just 500 meters (yards) from where the tornado struck. His workers told him they initially thought it was “just a large cloud.”

“But when it came closer, they felt a strong gust of wind,” Li said in a phone interview. “All the trash, papers and leaves on the ground were blown into the sky. We heard ambulance and police car sirens all night.”

The tornado damaged factories and equipment in an industrial park, CCTV said. More than 210 people have been rescued, and another 1,600 were evacuated. Power will be restored to homes sometime Thursday, while businesses will regain power in the next three days, CCTV said.

Tornados are rare in China. In 2016, a tornado and accompanying hailstorm killed 98 people in eastern Jiangsu Province.