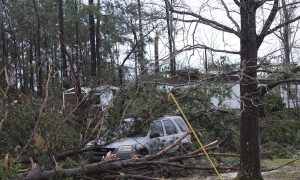 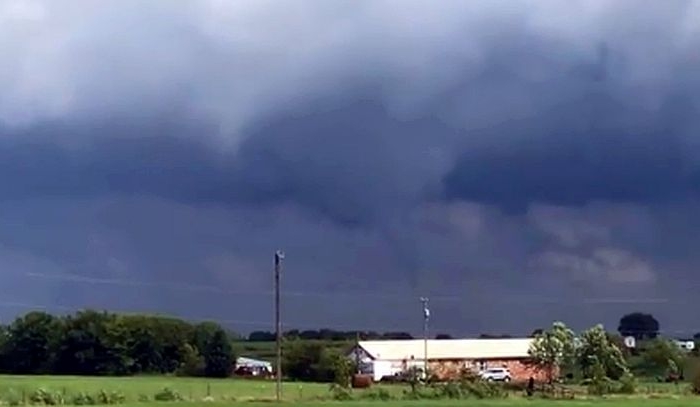 National Weather Service meteorologist Chuck Jones said the tornado touched down on March 12 in Dexter for about five minutes, but that its strength hasn’t been determined. The agency is sending a team to survey the damage.

Chaves County Mike Herrington in a statement says cleanup won’t start Wednesday because heavy winds of up to 70 mph are blowing debris around.

He told the Roswell Daily Record that five people were taken to hospitals with what appeared to be non-life threatening injuries.

The newspaper says roofs were ripped off buildings.

Often times the worst situations will bring out the best in people.

That’s proving true once again, this time in southeastern Alabama, where residents are still reeling from an outbreak of tornadoes that killed 23 people this week.

But their loved ones won’t have to worry, at least about the costs of the funerals. A Native American tribe says it will cover the funeral and burial expenses for all the victims of Sunday’s tornadoes.

The Poarch Band of Creek Indians tribe will be making a $184,000 donation to cover the costs, Lee County Coroner Bill Harris confirms to CNN.

Thank you to all individuals and organizations who have donated to the EAMC Foundation Lee County Disaster Relief Fund….

The Tribe Increased its Commitment

That’s more than the tribe had originally agreed to, but it increased its commitment when another donor that had agreed to split the costs backed out of the arrangement.

The original donation made by the tribe was going to be $50,000. However the other group stopped returning Harris’ calls, he said. When he explained that to the tribe, it asked what it would take to cover everything. The check will be hand delivered by the tribe early next week.

“My goal was to be able to provide what the families wanted” for “this casket or this service without having to scrimp because they didn’t have the money,” Harris said. “These folks have stepped up for a community need, and I appreciate that.”

Harris did not name the company that didn’t follow through on its commitment.

The money will be donated to the East Alabama Medical Center Foundation so that none of the money is spent on administration costs.

“It is at times of greatest need that we often see our communities coming together to help one another, this is one of those times,” Stephanie A. Bryan, the tribe’s CEO, said in a Facebook post. “Our thoughts and prayers are with all of those affected.”

“The Tribe is making a $184,000 donation to the East Alabama Medical Center Foundation to assist in the burial of the…

Tam Yvonne, who lost 10 family members to the Tornado, replied to Bryan’s post: “Thank you so very much for this generous donation. 10 of my family members were lost … I will be forever grateful for what you and your tribe have done for not only our family but, everyone affected by this horrible event.”

The Tribe Has Been in Alabama for Generations

Harris said he delivered the news personally about the funerals and burials being covered to the grandparents of Armando “AJ” Hernandez, the youngest victim. He said the two were thankful.

“I spoke with AJ’s family, his grandma and granddaddy, they were very humbled and very appreciative,” he said. “I feel so bad for them. I told them, y’all don’t worry about that (the cost), I have it covered.”

This is the kind of healing and compassion that should be coming out of Washington as well. Instead, we’re getting hate-mongering, blame and the politics of division and disunity. https://t.co/x2eOT2SlUE

Other local organizations have also come forward and donated toward the fund for the funerals, according to Harris. Additionally, a notable person from Alabama—Harris isn’t sharing the man’s name just yet—is donating $10,000 for foot markers for the graves.

The Poarch Band of Creek Indians is the only federally recognized Native American tribe in Alabama, and it operates a number of businesses, including casinos and hotels, in the region. The tribe descends from the original Creek Nation that once resided in Alabama and Georgia. The tribe was never removed from its lands and has kept a presence in the area for 200 years around the Poarch, Alabama reservation.

“The Tribe is making a $184,000 donation to the East Alabama Medical Center Foundation to assist in the burial of the victims from last Sunday’s devastating tornado in Lee County, AL. Read the full statement here: https://t.co/kMmem5pebJ