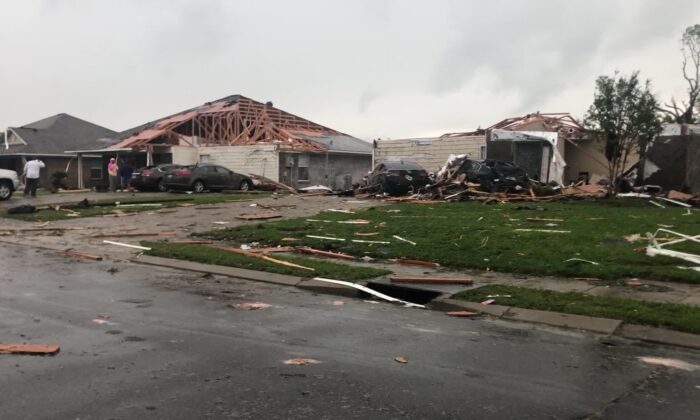 Destroyed homes in the wake of a tornado that ripped through Monroe, La., on April 12, 2020. (Courtesy of @gift_of_fofo/Twitter)
US News

Tornadoes Confirmed in Texas, Mississippi, Damage From Another Suspected in Louisiana

More than 95 million people in almost 20 states in the South and East could see severe weather on Easter Sunday and Monday, including heavy rain, hail and tornadoes.

At least one tornado was confirmed early Sunday in central Texas, with another Sunday afternoon in southern Mississippi, the National Weather Service reported.

The confirmation prompted the weather service to issue its highest level of tornado alert, a tornado emergency, for parts of Covington and Jefferson Davis counties at 4 p.m. (5 p.m. ET). The weather service’s Storm Prediction Center said confidence was high that the area was seeing a “strong to intense” tornado with winds of 115-165 mph.

The mayor of Monroe, Louisiana, said his town was damaged by suspected tornadoes Sunday and there have been more than a dozen tornado reports across eastern Texas, northern Louisiana and southern Mississippi.

Tornado watches have been issued across areas of Mississippi, Alabama and Louisiana, with storms expected to intensify throughout the day.

The threat from the storms coincided with the dangers from the ongoing COVID-19 pandemic. Officials in Mississippi said most county safe rooms were equipped with hand sanitizer and advised residents to still wear masks in the rooms.

“Social distance as best as possible while inside the safe room,” said Malary White, a spokeswoman with the Mississippi Emergency Management Agency.

Alabama Gov. Kay Ivey issued a state of emergency ahead of Sunday night’s expected severe weather, suspending orders where life could be endangered.

“Shelters and community safe rooms should remain open and accessible to all individuals seeking refuge from this severe weather, while implementing reasonable practices and procedures to prevent the spread of COVID-19 among those seeking shelter,” she said.

Tornadoes Touch Down in Texas and Louisiana

The Texas tornado early Sunday was confirmed south of Marble Falls, about 50 miles east of Austin, the weather service said. It appeared to weaken as it moved northward.

Mayor Jamie Mayo said there was suspected tornado damage in various parts of Monroe, a city in north-central Louisiana of about 50,000 people, according to a post on the city’s Instagram page.

The city posted photos showing downed power lines and significant damage to an airport building. “PLEASE AVOID THE AREA as emergency crews do their jobs,” the post read.

Alfonzo Galvan, a journalism student, recorded video of one Monroe neighborhood with debris in the street and several homes with significant damage. He told CNN his family was safe and didn’t receive any damage. He lives about 1.5 miles away from the area in the video.

“I got there after the tornado went through the area, but it was just a bunch of people surveying the damage to their homes and looking for their friends and loved ones making sure they were OK,” Galvan said.

“Even though the morning storms have left the state, many other dangerous systems remain across Louisiana. Please stay at home, follow the orders of local officials and tune in to your local weather person for updates,” Edwards said on Twitter.

“The images and reports of major tornado damage in the Monroe area are heartbreaking, and my prayers are with the people there. We are in contact with local officials in the area to provide support. I hope all of Louisiana is on high alert right now,” Edward said in a separate tweet.

“Well today started out interesting. Got woke up by the city’s emergency sirens going off because of a tornado. Yes we took shelter immediately and it’s since passed. Just an interesting way to start the day,” she wrote.

The large storm system that brought severe weather to areas of Texas on Saturday was expected to shift eastward, marring the holiday for many in the Southeast.

Severe weather went through San Angelo, Texas, on Saturday, causing the roof of a shed to fly off.

Strong, long-track tornadoes were forecast for Louisiana, Mississippi, Alabama and Georgia along with strong winds and hail the size of tennis balls or larger.

“Widespread damaging winds are also in the forecast for much of the Southern states,” CNN meteorologist Haley Brink said. “Winds this strong have the potential to cause similar damage to some tornadoes.”

“These storms are typically warned as severe thunderstorm warnings and not necessarily tornado warnings, which is why it is important to heed all warnings issued by the National Weather Service offices,” Brink said.

Flash flooding is expected in some states in the mid-South, including Tennessee, North Carolina and parts of northern Georgia and Alabama, where rainfall totals could reach up to 8 inches.

Most other areas will receive 3 to 6 inches.

A Second Wave of Severe Storms

Meteorologists warn that after a storm passes, residents shouldn’t let their guards down.

“For Georgia, we’re expecting two possible waves of activity: The first will be in the afternoon on Sunday as a warm front moves through the area,” said Kyle Thiem, a meteorologist with the National Weather Service office in Atlanta. “The second wave of storms will likely come through overnight as the main system moves eastward.”

By Monday, the system will focus on the East Coast. There will still be a threat of tornadoes, damaging straight-line winds, and hail.

To stay abreast of dangerous conditions, officials advise residents to have multiple methods of receiving severe weather alerts, including weather radio and smartphone apps. For apps, make sure they’re not on “do not disturb” or “silent” mode.

If a tornado touches down, sirens will likely sound. However, they’re not intended to wake people up; they’re meant to alert people who are outdoors that they need to go inside as quickly as possible.