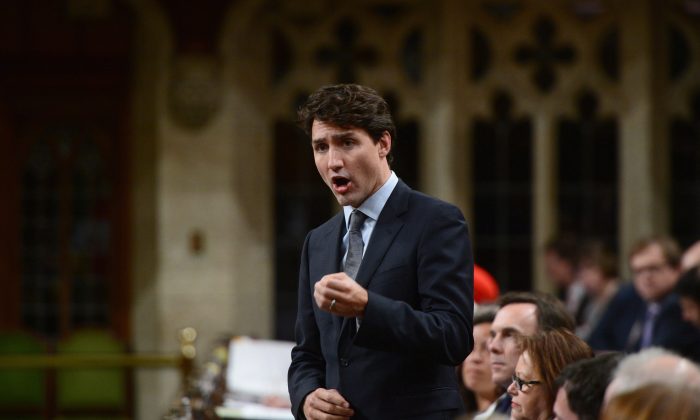 Prime Minister Justin Trudeau answers a question in the House of Commons on Parliament Hill in Ottawa on Nov. 22, 2016. (The Canadian Press/Adrian Wyld)
Canada

OTTAWA—Conservative MPs used their strongest rhetoric yet on Wednesday, Nov. 23, to question the prime minister’s decision to attend a private fundraiser with “billionaire communist donors.”

Seizing on the narrative that the Liberals remain a party of entitlements, opposition MPs agreed Prime Minister Justin Trudeau did not break any political financing laws when he attended a private, $1,500-a-plate fundraising event in May that included one person who helped fund Trudeau’s leadership bid and another who subsequently made a $1 million donation to the Pierre Elliott Trudeau Foundation.

Conservative MP Blaine Calkins said Trudeau broke the spirit of the law and his own ethical standards set out to cabinet ministers that they must avoid even the appearance of a conflict of interest.

The Liberals have an ethical problem following their own rules that the prime minister has set out for himself.
— Conservative MP Blaine Calkins

Liberal MPs said there can’t be a conflict of interest if Trudeau didn’t break any fundraising laws.

The Globe and Mail reported this week that among those attending were businessman Zhang Bin, president of the state-approved China Cultural Industry Association and the president of Toronto-based Shenglin Financial Group Inc., Shenglin Xian, who was looking for final approval from the Canadian government to operate a domestic branch of Wealth One Bank of Canada after receiving tentative approval from the previous Conservative government.

The newspaper reported that Bin and a partner subsequently made a $1 million donation to the Pierre Elliott Trudeau Foundation and the University of Montreal Faculty of Law. The foundation is a charitable organization which promotes research in the humanities and social sciences.

The Liberals pointed out that the foundation is non-political and its board of directors includes former Conservative MP Chuck Strahl and former New Democrat MP Megan Leslie.

Xian has been a regular donor to the Liberal party since 2011. Elections Canada records show he has given a total of $3,787 to the Liberals during that time, including a $1,200 donation in April 2013 to help Trudeau when he was running for party leader.

The Liberals were peppered with questions in the Commons about political financing. They dismissed links between the $1 million donation and the event as conspiracy theories that had no basis in reality. Francois-Philippe Champagne, parliamentary secretary to the finance minister, said the political fundraising system is transparent.

Trudeau was not in the House of Commons on Wednesday as he left for an official visit to Liberia.

NDP Leader Tom Mulcair said earlier in the day that there was no reason for Trudeau to skip the afternoon question period.

“Pay-for-access was supposed to be over once the Liberals came to power, and now we see that it’s continuing. Mr. Trudeau is refusing to provide answers and Canadians have every right to wonder why,” Mulcair told reporters after a caucus meeting.