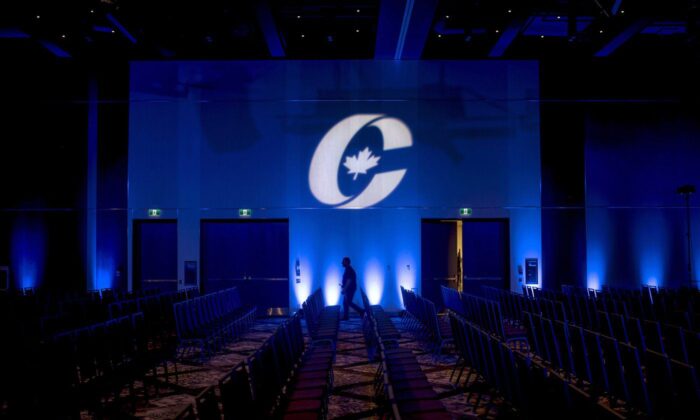 A man is silhouetted walking past a Conservative Party logo before the opening of the Party's national convention in Halifax on Aug. 23, 2018. (The Canadian Press/Darren Calabrese)
Canada

The Conservative party says the event announcing the next leader scheduled for Saturday will go ahead as planned, but in a more muted way.

The Queen’s death prompted the party to rethink the event, given how it will fall in the official mourning period.

After learning of her death, the chair of the Tories’ leadership election organizing committee said it would look for ways to announce the results in a respectful manner.

In a brief statement Friday morning, committee chair Ian Brodie confirmed the event in Ottawa will go ahead Saturday, but “with a revised program” that reflects the death.

It’s now planning to open with a tribute to the Queen and axed parts of the event that gave it a festive atmosphere, like confetti.

The party had been selling $150 tickets to attend, with members arriving from different parts of the country.

The gathering of Conservative faithful caps off a seven-month leadership contest between five candidates vying to replace former leader Erin O’Toole, who was voted out of his job by the majority of his caucus in February.

Members of Parliament Pierre Poilievre, Leslyn Lewis and Scott Aitchison are running, as are former Quebec premier Jean Charest and Roman Baber, a former Ontario legislator who was removed from Premier Doug Ford’s caucus over opposition to COVID-19 lockdowns.

Many in the party see the race as a competition between Poilievre and Charest, although expectation has grown throughout the summer that Poilievre is likely to take the prize.

That is based on reports from Poilievre’s campaign that it sold more than 300,000 memberships, and the MP’s consistent ability to draw crowds by the hundreds—and at times, thousands—which is rare in leadership contests.

Still, Charest’s campaign has said it has support in Ontario, Quebec and Atlantic Canada, potentially giving Charest a narrow path to victory, according to the point system that will be used to determine the outcome.

The party has begun the first stage of the ballot counting process by inputting voter cards ahead of Saturday’s event. More than 400,000 party members cast a ballot out of some 678,7000 eligible members, which is a record-setting figure.