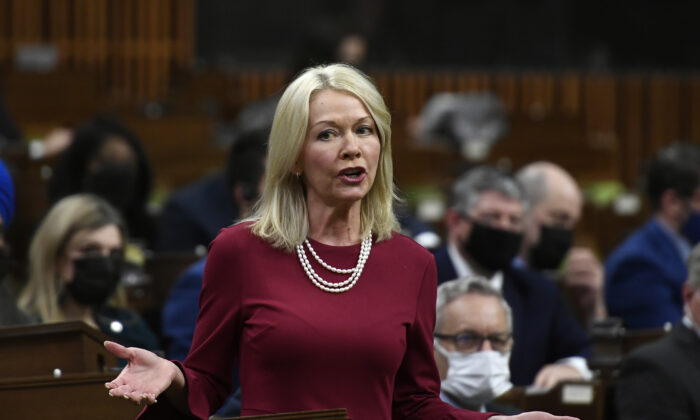 Interim Conservative leader Candice Bergen rises during question period in the House of Commons on Parliament Hill in Ottawa on Feb. 10, 2022. (The Canadian Press/Justin Tang)
Canada

The Conservative Party is ending its support for a federal carbon tax.

Interim leader Candice Bergen told her caucus about the change at a meeting on Feb. 9, saying that the carbon tax issue will be dealt with in the upcoming leadership race, according to a report in the Toronto Star.

Conservative MP John Williamson tweeted the Star article, headlined, “Conservatives drop support for carbon pricing, bring an O’Toole foe back from exile,” without disputing its reporting, except to say, “‘Tax’ spelled incorrectly by headline writer.” His comment is a reference to the Tories’ official position under Erin O’Toole’s leadership that their carbon levy isn’t a tax, but just a price on carbon generation.

The Conservatives’ decision comes a week after O’Toole was ousted by his caucus on Feb. 2.

O’Toole had announced his own version of a carbon tax during the 2021 federal election campaign, reversing a previous pledge to never introduce a national carbon tax scheme of any sort.

On Jan. 31, Conservative MP Bob Benzen issued a statement to caucus calling for a review of O’Toole’s leadership, citing his “adoption of a de-facto carbon tax policy in April 2021” as one of the reasons.

Bergen’s decision to drop the carbon tax was welcomed by the Canadian Taxpayers Federation (CTF), which issued a statement the same day saying that it was the right thing for the party to do.

“Carbon taxes cost Canadians a lot of money but aren’t working, and that’s exactly the kind of policy the Official Opposition should be opposing,” said CTF federal director Franco Terrazzano.

“Inflation is one of the key economic issues facing Canadian families and the carbon tax is making these tough times tougher by making it more expensive to drive to work and heat our homes.”

According to the Canada Revenue Agency, the federal carbon tax is scheduled to increase to 11 cents per litre of gasoline starting on April 1.

Bergen’s rejection of the carbon tax wasn’t the only decision of O’Toole’s she reversed this week; she also welcomed Sen. Denise Batters back into the party’s national caucus.

Batters was removed by O’Toole last November for spearheading a petition for party members to sign if they wanted to see his leadership reviewed earlier than the scheduled date of 2023. The senator said O’Toole flip-flopped on party policies around gun control and the carbon tax, which she said made him untrustworthy.

Despite being kicked out of the party’s national caucus, the Tory Senate caucus and the Saskatchewan regional caucus decided to keep her in the fold.

“I’m so grateful to be back in national caucus. I’m just thrilled—back into my Conservative family,” Batters told reporters after the Feb. 9 caucus meeting, saying it was an emotional moment.