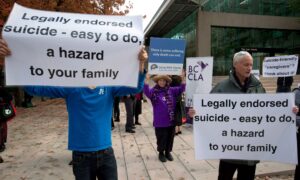 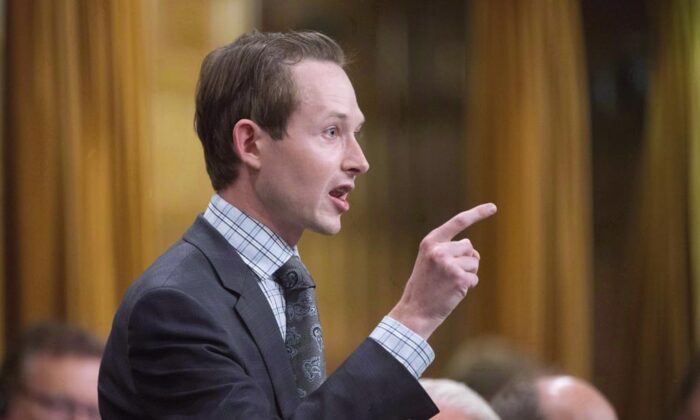 Conservatives and physicians are raising concerns about abandoning what they say are key safeguards in Bill C-7, the new assisted dying legislation.

Tory MPs and the doctors held a press conference Nov. 19 to highlight their concerns about the new medical assistance in dying (MAiD) legislation, including that the changes introduced aren’t getting enough scrutiny and that a chorus of voices that oppose the legislation are being ignored.

The original assisted dying legislation introduced in 2016, Bill C-14, was deemed by the Supreme Court to include a “carefully designed and monitored system of safeguards” that are being abandoned in the new legislation, Michael Cooper, deputy shadow minister for justice, said at the press conference on Nov. 19.

“There are significant concerns that Bill C-7 will eviscerate key safeguards that were tasked by Parliament a short four and a half years ago,” said Cooper, who also serves as vice-chair of the Special Joint Committee on Physician-Assisted Dying.

“It is why every national disabilities rights organization opposes Bill C-7. It’s why the Special Rapporteur on the Rights of Persons with Disabilities has expressed concern about Canada’s medical assistance in dying regime. It’s why more than 900 physicians have penned a letter expressing their opposition to Bill C-7.”

The legislation allows access to MAiD both for those who are near death and those who aren’t, including the disabled or chronically ill. Doctors and advocates for people with disabilities have warned the bill could make it easier for vulnerable people to be pressured into assisted death, or choose it to avoid being a burden on others.

Proponents argue the new bill strikes a better balance than previous legislation and allows broader access for those who are suffering and want MAiD.

However, several of the original safeguards to protect vulnerable persons the Conservatives pushed to keep by introducing amendments to Bill C-7, were voted down at the justice committee debating the matter on Nov. 19.

One such safeguard included the requirement that a person whose death is “reasonably foreseeable” must wait 10 days after being approved for assisted death before receiving the procedure. Under the new legislation, a patient who is near death could potentially receive a lethal injection on the same day it is requested—an option Cooper said is “virtually unprecedented” in other jurisdictions.

Five Liberal MPs voted against the motion to keep the 10-day reflection period, as well as one NDP and one Bloc Québécois MP on the committee.

“Ironic to see members just now having voted against the very safeguards that some of them voted for a few years ago. I’m profoundly impacted by that,” said Conservative MP Rob Moore after the vote on Nov.19.

MPs who voted against the amendments asserted their decision was guided by the testimony of a broad cross-section of experts including medical professionals and assessors and providers of MAiD.

“The preponderance of evidence that was heard during the course of the consultations makes it very clear that eliminating the 10-day reflection period is a critical thing to do. I think we need to listen to those people,” said Liberal MP James Maloney.

A Conservative motion to have a 7-day reflection period instead of 10 was also defeated, as were motions that the bill should require a person receiving MAiD to have two witnesses for the procedure instead of one, that a physician with expertise in the person’s medical condition be involved in the approval process, and that the bill should more clearly define what it means by a death being “reasonably forseeable.”

A number of doctors said at the press conference that their opposition to the bill was not heard due to an arbitrary cutoff the Liberals made on accepting submissions to the committee studying the bill without telling anyone, and that led to multiple submissions from physicians being rejected.

“As an emergency and family doctor, I know the importance of consultation, along with the day-to-day experiences and sufferings of Canadians which cannot be ignored,” said Dr. Adam Taylor, who appeared along with other colleagues and two Conservative MPs at the press conference.

“I’m terrifically concerned about this.”

At the justice committee debate, several Conservative MPs raised concern that the government was over-relying on the testimony of assessors and providers of MAiD while ignoring opposing viewpoints from other experts, such as palliative care physicians and disability advocates.

While the justice committee passed a motion allowing the physician’s briefs to be submitted later on Nov. 19, the political debate over the bill is unlikely to end there.

The Liberals first introduced Bill C-7 in February in response to a Quebec Superior Court ruling last fall that struck down a provision in the existing legislation that restricted access to a doctor-assisted death to those whose natural death is reasonably foreseeable.

The emergence of the COVID-19 pandemic shut down the legislative process for the bill, but before it did, the government had held two months of consultations, including 10 roundtables across the country.

A decision by the Liberals to prorogue Parliament in August meant they needed to reintroduce the bill, which they did in October.

The new bill would allow access both for those who are near death and those who aren’t, with more stringent rules applied in those circumstances.

For those deemed to be near death, the government is proposing to drop the requirement that a person must wait 10 days after being approved for an assisted death before receiving the procedure. It would also reduce the number of witnesses needed to one from two.

It also proposes to drop the requirement that a person must be able to give consent a second time immediately before receiving the procedure.

Several physicians at the news conference said removing the waiting period, and the need for a second sign-off, raises the risk of people requesting and receiving MAID on the same day, when perhaps that wasn’t what they truly wanted.

“In my clinical experience, many requests for MAID actually requested a need for good-quality palliative care, and providing that care to the patient actually changed the request for MAiD and changed their decisions,” said Dr. Stephanie Kafie.

The bill is now being studied by the justice committee after passing second reading in the House of Commons 246-78 in late October.

The Conservatives have argued the government should have appealed the original court ruling to the Supreme Court, rather than trying to rush legislation through Parliament to meet a twice-extended, court-imposed deadline of Dec. 18.

Cooper said the Tories also want an amendment that would protect the conscience rights of health-care practitioners who, for moral or religious grounds, refuse to take part in an assisted death or even to refer patients to someone who will.

In May 2019, the Ontario Court of Appeal issued a unanimous ruling that doctors who have moral objections to providing health services like abortion or assisted death must provide patients with an “effective referral”’ to another doctor.