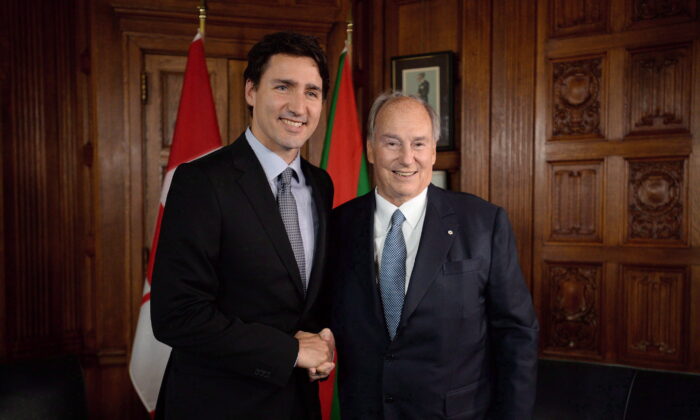 Documents show RCMP considered charging Trudeau, but decided against it because it might hurt the public interest
By Andrew Chen

The Conservatives are challenging Prime Minister Justin Trudeau following the release of RCMP documents that show the police had considered charging the prime minister over his 2016 vacation at the Aga Khan’s private island in the Bahamas.

The RCMP documents from 2019, recently obtained by the Globe and Mail through an access-to-information request, say the police had looked at whether they could charge Trudeau with breach of trust or fraud after the prime minister’s family took a Christmas vacation at the Ismaili Muslim leader’s private retreat in 2016.

The police investigation was based on a December 2017 report released by then-federal ethics commissioner Mary Dawson, who concluded that Trudeau had violated four sections of the Conflict of Interest Act by accepting the invitation, since some official business between the Aga Khan and the Canadian government was ongoing at the time.

The RCMP didn’t lay charges ultimately, citing the lack of evidence that Trudeau had committed a breach of trust, though the police debated whether the prime minister could be charged with fraud, as they believed there were “reasonable grounds” to think fraud may have been committed, according to the RCMP documents.

The police decided in the end that it would not be in the public interest to lay charges due to a lack of clarity in federal rules that apply to accepting gifts.

On April 25, Conservative ethics critic James Bezan also shared a “decision tree” from the RCMP documents showing that section 121(1)(c) of the Criminal Code would lead to a verdict of fraud on the government.

“RCMP documents reveal the only thing that stopped them from charging Justin Trudeau under Section 121(1)(c) of the Criminal Code for Fraud on the Government was whether or not he granted himself a get-out-of-jail-free card,” Bezan wrote on Twitter on April 25.

RCMP documents reveal the only thing that stopped them from charging Justin Trudeau under Section 121(1)(c) of the Criminal Code for Fraud on the Government was whether or not he granted himself a get-out-of-jail-free card.
See for yourself ⬇️ #cdnpoli pic.twitter.com/GkEzjMOSYI

Tory interim leader Candice Bergen also commented on social media, tweeting a video clip of Bezan raising the issue in question period and asking whether Trudeau had given himself “a free pass to avoid criminal charges.”

“Canadians deserve to know the truth,” she wrote.

“Now we know why Mounties didn’t charge him. They thought it would hurt public interest to jail someone as powerful as him,” he wrote.

The Tory leadership candidate also posted a video of himself challenging Trudeau on the violation of the criminal code sections during question period in 2018.

“An island like the one on which he vacationed, … they cost a lot of money, approximately $200,000 for the amount of time and the number of people the prime minister had vacationing as part of this gift,” Poilievre said.

Back in 2018, I asked Justin Trudeau about criminal code sections he violated.

Now we know why Mounties didn’t charge him. They thought it would hurt public interest to jail someone as powerful as him.

If you think the law should apply to all, join here: https://t.co/d9I1kyr6U1 pic.twitter.com/BAuSushgCE

One of Poilievre’s competitors in the Tory leadership race, Jean Charest, also condemned the prime minister on social media.

“We now know the RCMP was considering charging Justin Trudeau with fraud,” he wrote in a Twitter post on April 25.

“The rule of law is not a buffet. Parliamentarians, and especially the Prime Minister, can’t pick and choose when to follow them.”

The Epoch Times reached out to the Prime Minister’s Office for a response, but didn’t immediately hear back.

Aga Khan, the spiritual leader of the Ismaili Muslims, was a family friend of Trudeau’s father, former prime minister Pierre Trudeau. The fact that he is the head of the Aga Khan Foundation Canada and the Global Centre for Pluralism in Ottawa, both active lobbyist organizations registered with the federal government that have received hundreds of millions in public funds over the years from both Conservative and Liberal governments, adds to the controversy around the trip.

Following media reports in April 2018, Trudeau called a press conference in which he apologized for the incident, saying he considered the Aga Khan a friend and didn’t think the free vacation would be a conflict issue.

The Globe reported that the police were unclear whether Trudeau could be prosecuted under section 121(1)(c) of the Criminal Code, which includes a provision that allows officials to accept benefits from individuals with government dealings, provided the official has the written consent of the head of their branch of government.

Since Trudeau himself was the sitting prime minister and head of government, “an investigation and prosecution under this section may not be in the public interest if it cannot be definitely determined whether or not Mr. Trudeau can simply provide consent to himself,” RCMP Corporal Michael Kiperchuk said in a briefing note.

The police initiated the investigation into Trudeau’s 2016 trip to the Bahamas after former Conservative MP Peter Kent wrote to RCMP Commissioner Brenda Lucki in May 2019 to request a criminal probe. The police concluded its investigation on Sept. 25, 2019, saying in an internal document there was “insufficient evidence to proceed” with criminal charges, the Globe reported.