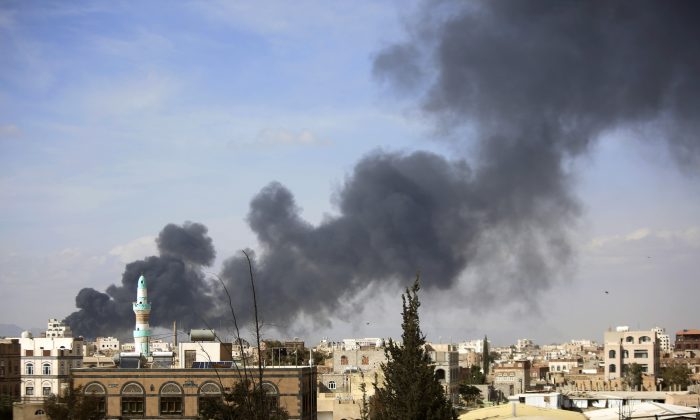 SANAA, Yemen—The lifeless body of Yemen’s top Salafi cleric in the southern port city of Aden was found disfigured on Sunday hours after he was abducted following an anti-extremism sermon, security officials told The Associated Press.

Government forces seized Aden from Shiite rebels last July, but have been unable to restore order there ever since. With government forces now pushing north toward the rebel-held capital, Sanaa, the vacuum in Aden has given rise to affiliates of extremist groups like al-Qaida and the Islamic State (ISIS), who have grabbed lands and exercised control in various parts of the city for months.

The influential cleric, Samahan Abdel-Aziz, also known as Sheikh Rawi, had delivered a fiery sermon against the al-Qaida and ISIS branches on Friday, the officials said. His body was found bloodied and bearing signs of torture in Sheikh Othman, an area largely controlled by extremists, they added.

Abdel-Aziz was kidnapped by gunmen outside his mosque late Saturday in the pro-government neighborhood of Bureiqa, they said.

The officials spoke on condition of anonymity because they are not authorized to talk to the media. They remain neutral in the war that has splintered the Arab world’s poorest country.

Yemen’s conflict pits a loose array forces fighting on the side of the internationally recognized government against the Shiite rebels and troops loyal to a former president, who together control the capital and much of northern Yemen. A Saudi-led coalition backed by the U.S. intervened on the government’s side last March.

Earlier in the day, Human Rights Watch said the rebels, known as Houthis, have for months restricted food and medical supplies to Yemen’s third-largest city, Taiz, in what it described in a statement as “serious violations of international humanitarian law.”

“The Houthis are denying necessities to residents of Taiz because they happen to be living in areas that opposition forces control,” said Joe Stork, deputy Middle East director at Human Rights Watch. “Seizing property from civilians is already unlawful, but taking their food and medical supplies is simply cruel.”

The United Nations humanitarian coordinator for Yemen said Saturday his organization is seeking ways to ensure unconditional access to Taiz, a city of about 25,000 that has been under Houthi siege and shelling for months.

Taiz, which lies on the border between northern and southern Yemen, could be a major turning point in the civil war, potentially cementing the Houthis’ loss of Yemen’s south.