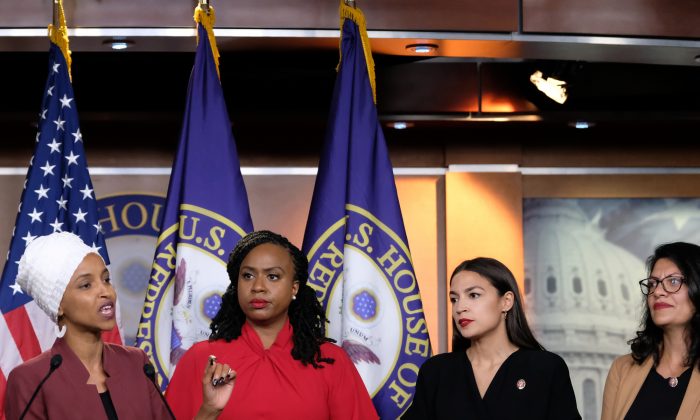 A top advisor to President Donald Trump said that the four radical freshman lawmakers known as the Squad “detest America as it exists.”

“These four congresswomen detest America as it exists, as it is currently constructed. They want to tear down the structure of our country. They want it to be a socialist, open borders country,” Stephen Miller, the advisor, said during an appearance on Fox News on July 21.

“If you, as Donald Trump says, want to destroy America with open borders, you cannot say you love your country. If you attack border agents the way that Ocasio-Cortez has, it means you have a deep-seated hatred of the nation as it exists,” Miller added.

“That’s why you want to erase its borders, fundamentally transform the country and in the process, it doesn’t matter if American citizens lose their jobs, lose their homes, lose their livelihoods, lose their health coverage and lose their very lives.”

Host Chris Wallace asked Miller about Trump telling the congresswomen to leave the country if they don’t like it before noting that Trump himself in the past criticized America while Barack Obama was president.

“But there’s a fundamental distinction between people who think that we need to lean into and strengthen America’s core values, whether it’d be our constitutional values, the rule of law, the principles of Western Civilization, or people who think it would basically need to turn America into Venezuela.”

Miller also singled out Omar for her comments about the Sept. 11, 2001, terror attacks and Ocasio-Cortez for her comparison of immigration detention facilities to concentration camps, rhetoric mirrored in the manifesto of an Antifa extremist who attacked a facility in Washington recently before being shot dead.

“And perhaps the most shocking of all, with the comments made by Representative Ocasio-Cortez saying that our border agents are running concentration camps, and therefore they are Nazis, and therefore, everyone in that audience and you and me and everyone who supports our border patrol are by extension Nazis sympathizers. We support Nazis if we support border agents.”

“As a Jew, as an American Jew, I am profoundly outraged by the comments from Ocasio-Cortez. It is a historical smear. It is a sinful comment. It minimizes the death of 6 million of my Jewish brothers and sisters. It minimizes their suffering and it paints every patriotic law enforcement officer as a war criminal, and those are the comments, Chris, that we need to be focusing on,” Miller added.