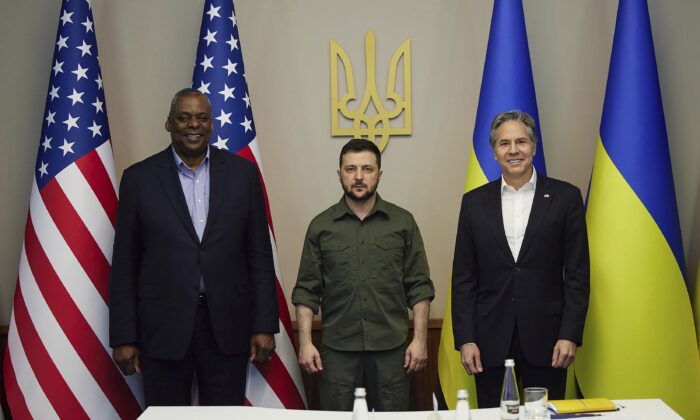 Two top U.S. officials met with Ukraine’s president in Kyiv over the weekend, pledging continued support for the country as it defends itself against Russia.

“Our focus in the meeting was to talk about those things that would enable us to win the current fight and also build for tomorrow,” U.S. Secretary of Defense Lloyd Austin told reporters in Poland on April 25. “We talked about security force assistance, and we talked about training, and we also talked about the key things that we’re going to discuss in the session that I’ll conduct tomorrow at Ramstein with a number of ministers of defense and chiefs of defense.”

U.S. officials shared that American diplomats will be returning soon to Ukraine and that President Joe Biden plans to nominate a new ambassador to Ukraine. Bridget Brink, currently the ambassador to Slovakia, was nominated on April 25.

“We had an opportunity as well to talk about where this goes from here, with the success that Ukraine has had,” Blinken said.

“It’s also true that Russia continues to try to brutalize parts of the country, and the death and destruction that we continue to see is horrific. But Ukrainians are standing up, they’re standing strong, and they’re doing that with the support that we have coordinated from literally around the world.”

He also said Russia “is failing” in that effort.

“The bottom line is this: We don’t know how the rest of this war will unfold, but we do know that a sovereign, independent Ukraine will be around a lot longer than Vladimir Putin is on the scene,” Blinken said. “And our support for Ukraine going forward will continue. It will continue until we see final success.”

On the orders of President Vladimir Putin, Russia invaded Ukraine on Feb. 24. Since then, Russian forces have taken control of portions of Ukraine, but Ukraine and its allies say that Ukraine’s resistance has impeded Russia from subjugating it.

During a portion of the meeting open to the press, Zelenskyy thanked the United States for helping Ukraine.

He also said his country’s priorities were getting additional weapons from the United States and European allies and convincing leaders of those countries to impose more sanctions on Russia.

“The third issue is financial support. The fourth issue is security guarantees, an important issue, as we consider the United States to be a leader among those countries that are future guarantors of Ukraine’s security,” Zelenskyy said.