Top US Envoy in Ukraine Testifies in Democrat-Run Impeachment Probe 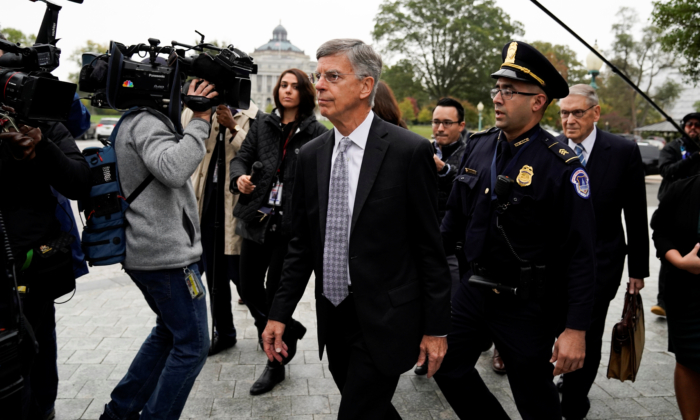 Acting U.S. ambassador to Ukraine Bill Taylor arrives to testify at a closed-door deposition as part of the Democrat-run impeachment inquiry on Capitol Hill in Washington on Oct. 22, 2019. (Carlos/Jasso)
By Ivan Pentchoukov

The top U.S. diplomat in Ukraine testified to lawmakers behind closed doors on Oct. 22 as part of a Democrat-run impeachment inquiry centered on allegations related to President Donald Trump’s call with the leader of Ukraine.

William Taylor, the charge d’affaires at the U.S. embassy in Ukraine, didn’t answer questions as he walked by journalists on his way to face lawmakers from three House committees leading the investigation.

Taylor is the latest witness to testify in the inquiry. He will likely face questions about a text message in which he called the withholding of aid to Ukraine conditioned on help with a political campaign “crazy.”

“As I said on the phone, I think it’s crazy to withhold security assistance for help with a political campaign,” Taylor wrote in a text message on Sept. 9 to Kurt Volker, the State Department’s then-special envoy to Ukraine, and Gordon Sondland, the U.S. ambassador to the European Union.

Volker and Sondland have already testified before the committees. Volker told lawmakers there was no quid pro quo tying the temporary hold on the military aid to Ukraine and the request by Trump for Ukraine to look into the Ukrainian business dealings of Joe Biden and his son, Hunter Biden. Sondland told lawmakers that Trump specifically instructed him that there is no quid pro quo related to his request to Ukraine.

Taylor’s testimony is the latest in a political drama triggered by House Speaker Nancy Pelosi’s (D-Calif.) announcement of an impeachment inquiry. Republicans have intensified the criticism of the probe in recent days, accusing the Democrats of leading secret, one-sided proceedings. Trump called the inquiry a “lynching” in a Twitter message on Oct. 22.

“So some day, if a Democrat becomes President and the Republicans win the House, even by a tiny margin, they can impeach the President, without due process or fairness or any legal rights. All Republicans must remember what they are witnessing here—a lynching. But we will WIN!” the president wrote.

Taylor was tapped to serve as charge d’affaires in Kyiv, where he had served as U.S. ambassador from 2006 to 2009, after Trump in May abruptly recalled Ambassador Marie Yovanovitch, who had come under attack from the president’s personal lawyer, Rudy Giuliani.

Yovanovitch, who testified in the impeachment inquiry on Oct. 11, told lawmakers that the Trump administration never brought up the investigations of Joe and Hunter Biden. Her testimony is similar to that of Volker and Sondland. Volker told lawmakers that Joe Biden was never a topic of conversation. Sondland testified that he was unaware of Trump’s request about the Bidens until the White House released the transcript of the July 25 call between Trump and Ukrainian President Volodymyr Zelensky.

During the call, Trump asked Zelensky to look into a server tied to CrowdStrike, the cybersecurity firm that examined the Democratic National Committee server after it was allegedly hacked by Russian operatives. Trump also asked the Ukrainian leader to look into the Ukrainian business dealings of Hunter Biden and the removal of a top Ukrainian prosecutor.

Trump’s request to Zelensky appears to have referred to the firing of Viktor Shokin, a top prosecutor who was investigating Burisma, a major Ukrainian gas firm. Hunter Biden was serving on the board of directors at Burisma when Shokin was fired. Joe Biden bragged early last year about forcing Shokin’s firing by withholding $1 billion in U.S. loan guarantees. Shokin later wrote in a sworn statement that he was fired due to pressure from Biden, because he refused to drop the Burisma investigation.

Trump has denied any wrongdoing and accused Democrats of trying to oust him to prevent him from being reelected. He also has called on his fellow Republicans to get tougher and fight harder against the fast-moving impeachment inquiry.

Two other witnesses are expected to give testimony this week in the impeachment inquiry.

The White House has vowed to not cooperate with the Democrats unless they hold a formal House vote to authorize the proceedings. Several other executive branch agencies have also defied subpoenas from the impeachment investigators.

The impeachment inquiry was triggered by an anonymous whistleblower who complained that Trump may have abused his office by requesting that Ukraine investigate a political rival. The whistleblower alleged that Trump’s request may have amounted to a campaign finance violation. The Department of Justice reviewed the complaint and determined no further action was necessary.