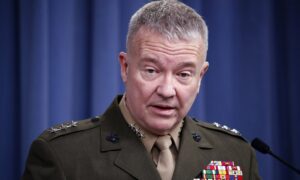 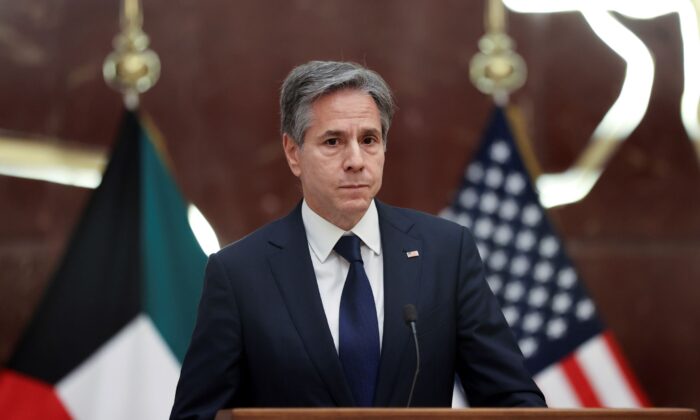 Secretary of State Antony Blinken participates in a news conference at the Ministry of Foreign Affairs in Kuwait City, Kuwait, on July 29, 2021. (Jonathan Ernst/Pool via AP)
International

Top US Diplomat Talks Relocation of Afghan Allies in Kuwait

DUBAI, United Arab Emirates—The United States is negotiating with Kuwait and other countries whether they can host Afghans who supported the American war effort and could face Taliban revenge attacks if they stay in Afghanistan, America’s top diplomat said Thursday.

During a visit to tiny, oil-rich Kuwait, U.S. Secretary of State Antony Blinken did not announce any deal or disclose critical details about the process, such as who would be eligible for relocation or where they would be housed.

As American troops complete their withdrawal from Afghanistan, the Biden administration has come under heavy pressure to quickly evacuate Afghan interpreters, drivers, and other workers who helped U.S. forces during the two-decade war and now find themselves at risk of retribution by the Taliban terrorists.

“The United States is committed to helping those who helped us during our time in Afghanistan over the last 20 years,” Blinken said at a joint press conference with his Kuwaiti counterpart. “We’re actively engaged in that process and notably in relocation planning for those brave Afghans and their families.”

The evacuation planning, which could affect tens of thousands of Afghans, comes as the Taliban gain more ground throughout Afghanistan, seizing swaths of the countryside, and fueling fears of a violent future. Civilian casualties surged in the first half of the year, according to a United Nations report.

Afghan allies have complained of a bureaucratic nightmare as they try to obtain the special immigrant visas offered to foreign nationals deemed to be in need of protection because of their cooperation with the U.S. government.

There are more than 18,000 visa applications pending, some for as long as nearly three years.

On Iran, Blinken dismissed criticism from Supreme Leader Ayatollah Ali Khamenei that America’s “stubborn” stance was to blame for stalled negotiations over Tehran’s now-tattered nuclear deal with world powers. Khamenei’s apparent call for a more adversarial approach to the West on Wednesday came as his protege, President-elect Ebrahim Raisi, is set next week to become head of the country’s civilian government.

Hopes for a quick revival of the accord, which granted Iran sanctions relief in exchange for curbs on its nuclear program, have faded further since the last round of indirect talks between Iran and the United States in Vienna broke last month.

“I think we have clearly demonstrated our good faith and desire to return to mutual compliance with the nuclear agreement,” Blinken said. “This process cannot go on indefinitely.”

He added: “The ball remains in Iran’s court.”

Iran has rejected that assertion, insisting that because the United States, under former President Donald Trump, scrapped the landmark 2015 deal, it should move first to lift its crippling sanctions.

Kuwait’s foreign minister, standing beside Blinken, appeared to reject any suggestion it would be next to join the U.S.-brokered normalization agreements with Israel as its Gulf Arab neighbors, the United Arab Emirates and Bahrain, did last year.

“It is the whole struggle of the Palestinians, now over 73 years of ordeal,” said Ahmed Nasser Al Mohammed Al Sabah. “We truly do think that the only viable solution is a two-state solution. And if we lose focus of that, then it might be put into … jeopardy.”

The so-called “Abraham Accords” reversed the decades-long Arab policy of conditioning relations on a resolution of the Israeli-Palestinian conflict and drew intense backlash from the Palestinians.

Blinken arrived in Kuwait City late Wednesday from India. He held high-level talks on military cooperation and regional security with Kuwait’s ruling emir and other officials, addressed American diplomats and toured the country’s Parliament—a rarity in the neighborhood of Gulf Arab sheikhdoms.

Kuwait has been a staunch U.S. ally since the 1991 Gulf War expelled the occupying Iraqi forces of Saddam Hussein. The country, slightly smaller than the U.S. state of New Jersey, hosts some 13,500 American troops, most based at Camp Arifjan south of Kuwait City, and the forward command of U.S. Army Central.