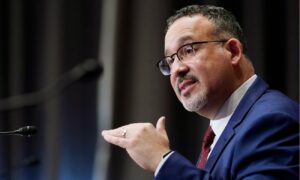 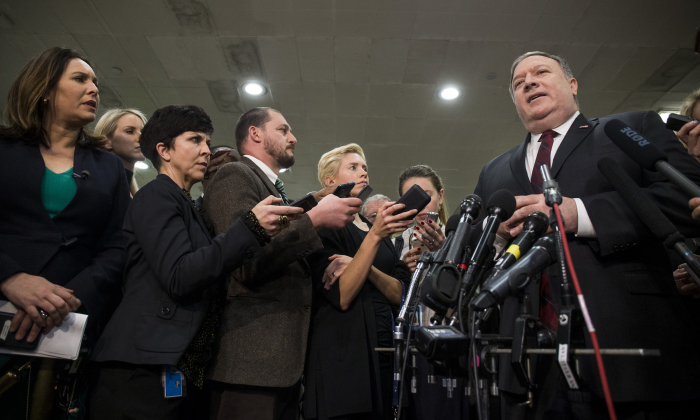 Secretary of State Mike Pompeo speaks to the press after briefing members of the Senate on the current relationship between Saudi Arabia and the United States on Capitol Hill on November 28, 2018 in Washington, DC. (Zach Gibson/Getty Images)
US

“We have no smoking gun the crown prince was involved, not the intelligence community or anyone else. There is no smoking gun,” Mattis told reporters at the Pentagon.

Mattis said he has read all the U.S. intelligence reports about the incident and a transcript of what is believed to be an audio recording of the killing.

After repeated calls from some members of Congress for a strong U.S. response to Khashoggi’s death, both Mattis and Pompeo briefed the Senate behind closed doors about Saudi Arabia, the Oct. 2 murder of Khashoggi and the war in Yemen. Echoing similar comments from President Donald Trump, they said downgrading U.S. ties with ally Saudi Arabia would harm national security.

Pompeo acknowledged to the lawmakers that the Yemen conflict—in which Saudi Arabia is involved—has taken a terrible toll on civilians, but argued that the Saudis provide an important counterweight to Iran in the region.

“More broadly, degrading ties with Saudi Arabia would be a grave mistake for U.S. national security, and that of our allies,” Pompeo said in prepared remarks to the Senate. “The kingdom is a powerful force for stability in an otherwise fraught Middle East.”

However, Pompeo and Mattis didn’t seem to sway leading Senate foreign-policy voices, including some of Trump’s fellow Republicans, who said they believed taking no action would send a more dangerous message to the world.

“I think 80 percent of the people left the hearing this morning not feeling like an appropriate response has been forthcoming,” Corker said.

The Senate was considering a resolution later on Nov. 28 that would stop U.S. refueling and other support for the Saudi-led campaign in Yemen.

Trump vowed last week to remain a “steadfast partner” of Saudi Arabia and said it wasn’t clear if the prince knew about the plan to kill Khashoggi.

Sen. Lindsey Graham (R-S.C.), who has been one of Trump’s closest congressional allies, said he wanted to know whether the CIA assessment supports his belief that the killing couldn’t have happened without the prince’s knowledge.

Graham said he would withhold his vote on any key issue, including must-pass spending bills, until the CIA briefs senators about Khashoggi’s killing. When asked if he had told Trump as much, Graham said, “I just did.”

Saudi Arabia and other Gulf Arab states have been battling in Yemen since 2015 to restore a government that was driven out by the Houthis, Shiite Muslim fighters that Yemen’s neighbors view as agents of Iran. The war has killed more than 10,000 people and created the world’s most-urgent humanitarian emergency.

Pompeo said the United States would provide an additional $131 million for food aid in Yemen.

Mattis said pulling back U.S. military support in Yemen and stopping weapons sales to important partners would be misguided.

“Our security interests cannot be dismissed,” Mattis said, even as Washington seeks accountability for Khashoggi’s murder, a crime which “our country does not condone.”

The crown prince arrived in Buenos Aires, Argentina, on Nov. 28 for a summit of G-20 nations.