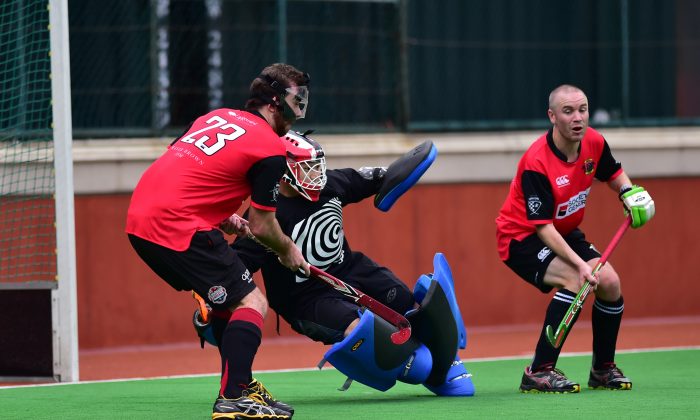 HONG KONG—After four rounds matches of the Hong Kong Hockey Association Premier Division, three teams are pushing ahead in the standings: Khalsa-A and SSSC-A have 12-points and HKFC-A is on 9-points (but have only played 3-games). KNS-A and HKCC-A are both on six-points but HKCC still have a game in hand. On goal difference Khalsa has already stretched into a 17-point lead having amassed 34 goals in the 4-matches with a goal difference of +27 compared with +10 for SSSC-A and +5 for HKFC-A.

This shows the caliber of the Khalsa side that is not just able to win but to win by a big margin. Admittedly opponents have varied but Khalsa have already played and beaten KNS the fourth placed team 5-1, and SSSC played KNS last weekend (Oct 11) and won 6-1. But the crunch matches between the top teams will not start until Nov 8 when HKFC-A play Khalsa (at home), HKFC-A then play SSSC-A on Nov 22, and Khalsa-A and SSSC-A will meet on Dec 6.

Shaheen-A who defeated HKU-A 8-1 in the previous week, lost to leading team Khalsa-A 8-1 on Oct 11, showing the big difference in strength between the top and the bottom teams.

Playing at Sports Road on Oct 11, HKCC-A had a comfortable 5-0 win over HKU-A while Valley-A overcame HKFC-B in a well contested encounter 3-1.

Shaheen, HKCC (after 3 matches), Valley and HKFC-B are all on 3-points in the standings so this weekend’s encounter between Shaheen and Valley is a good opportunity for one of them to move up the table as both HKCC and HKFC-B have difficult opponents meeting Khalsa and SSSC respectively.