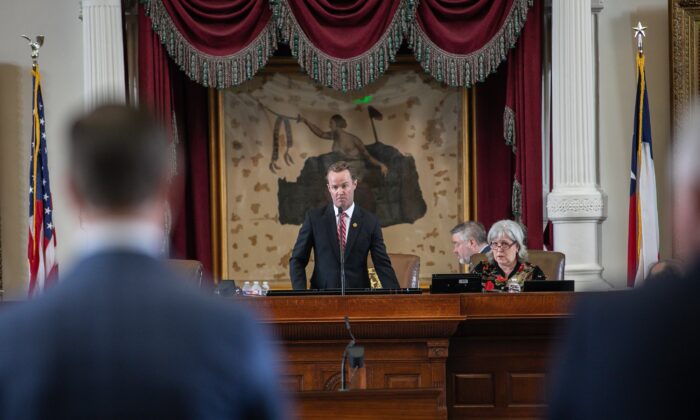 Two top officials in Texas have unveiled legislative proposals in the wake of a mass shooting at an elementary school in the state.

Texas House Speaker Dade Phelan, a Republican, released details on June 13 of a slate of proposals he wants passed, including bills that would expand telemedicine mental health services to children, provided the child’s parents consent; increase the number of teams that specialize in treating youth who experience psychotic episodes; and fund the purchase of silent panic alarms for school districts.

Phelan also said he wants funding for training for school resource officers, or armed officers who are stationed at schools.

The proposals came in a letter to Texas Lt. Gov Dan Patrick, who earlier in June urged the legislature to commit $50 million to buy bulletproof shields for every law enforcement officer in Texas.

“If every member of law enforcement across the state, approximately 80,000 officers, had a bulletproof shield in their vehicle, their ability to respond to an active shooter situation would be greatly enhanced. Of course, more training is needed, but we cannot wait for another school year to begin to better-equip our police who respond to these attacks,” Patrick said in a statement at the time.

The officers who responded to the mass shooting at Robb Elementary School in Uvalde on May 24 reportedly waited to breach the classroom where a teenager was shooting students and teachers because they did not have such a shield.

Phelan told Patrick he fully supports allocating funds for bulletproof shields but that he wants to make sure there is “a multi-faceted response” to what unfolded in Uvalde and stressed that mental health resources must be part of the approach.

“I urge your consideration and support of these efforts,” Phelan said, expressing hope that the bills will be passed before the next school year starts.

Gov. Greg Abbott, a Republican who had encouraged Patrick and Phelan to assemble proposals in the wake of the attack, praised both officials “for quickly offering proposals that can immediately make schools safer, provide needed mental health support, and help our law enforcement officers on the front lines.”

Top officials in Texas have resisted calls for new laws to restrict access to guns, arguing that it is better to focus on mental health and school safety.

There was an armed officer responsible for the Uvalde school but he was present when the shooter entered the campus, officials have said.

The law enforcement response to the shooting is under investigation by multiple agencies.

Many Democrats in Texas have criticized Republicans, saying the shooting highlighted a need to act on guns.

Republicans “are now all in on hardening schools—turning them into armed fortresses—without any mention of shooters or their weapons. The mental gymnastics required to avoid any discussion of gun reform is astounding. Shameful,” state Rep. Diego Bernal, a Democrat, said in a recent statement.

“It’s time to ban assault rifles so we never see another massacre like the one at Robb Elementary ever again,” Ike Hajinazarian, a spokesman for the Texas Democratic Party, added.