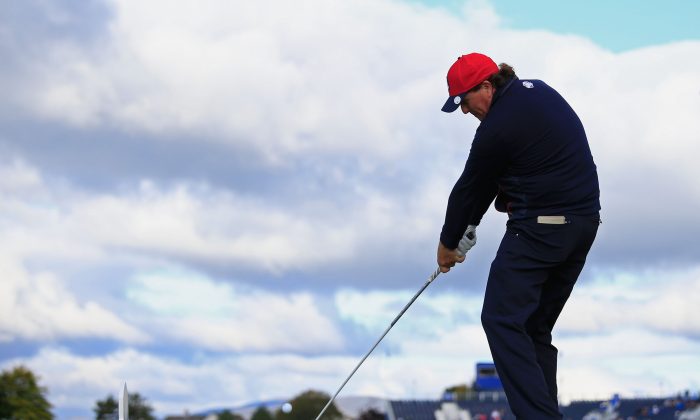 Phil Mickelson had a slow start to 2014 and at 44 his best years are probably behind him. (Jamie Squire/Getty Images)
News

As the PGA Tour kicks off this Friday with the playing of the Hyundai Tournament of Champions at Kapalua Resort in Maui, Hawaii—there are a number of central questions that will need to be answered as the golf season unfolds for its long annual journey.

Can Tiger win a major in 2015 and be physically able to play a full campaign?

Stuck on 14 majors since winning the ’08 U.S. Open in an epic playoff. Tiger’s last PGA Tour victory—he has 79 in total—came at the Bridgestone in August 2013. Woods only played a partial campaign last year and was nowhere near the form he showed in ’13. Is he ready for a full campaign—capable of competing and showing press, competitors and fans he still has what it takes? Tiger has brought on a new swing “consultant” but the doubts are growing more widespread.

What does Phil Mickelson have left in the competitive gas tank?

No wins since his Open Championship triumph at Muirfield in ’13. Only really contended in the ’14 PGA Championship but ran out of fuel in the last several holes. Phil has lost some pounds in his hope to return to relevancy at the highest level. The early part of the season is when Phil has shown his competitive fires in years past. At 44, Mickelson needs to show he is still a presence in the front mirror—not the rearview one.

How will golf deal with the ever growing water shortage?

The western portion of the USA has been experiencing a major drought, reaching critical mass in a sizeable area of California and the conditions are not abating. Water rights are a hot topic. Golf courses will need to make significant modifications or be seen as wasteful usages. The staging of the two Opens in ’14 at Pinehurst 2 showed what’s possible when using less water. Taking similar proactive actions across the board now lessens the likelihood of being the center of a gathering environmental bulls-eye.

How will the fescue greens play when the U.S. Open comes to Chambers Bay in the Pacific Northwest?

For the first time the National Open will be contested on putting surfaces consisting of fescue greens. Host site Chambers Bay—located in the Tacoma, WA area—is a new site for America’s biggest golf title. There have been past issues when the greens have not been at their optimum best—particularly when the site prepared to host the ’10 US Amateur. New U.S. Open venues can be a considerable toss-up but being in the Northwest for the first time will likely mean mega numbers of people attending. The key is making sure the quality of the greens cannot become the main story line.

Can Michelle Wie show a consistent pulse whenever competing?

The issue for Michelle Wie boils down to one word—passion. There’s little doubt she has the requisite skills—winning the Women’s Open in ’14 at Pinehurst 2 proved her capabilities. The issue is can she fashion consistent results and add to a portfolio that until recently had heads shaking in wondering if she would ever tap into her innate talents. Her year in ’14 showed what she can do—her year in ’15 will show if the resolve to do even more is present.

Is Rickie Fowler capable of reaching the winners circle?

Rickie Fowler showed in ’14 he is much more than a walking billboard for colorful clothing. He joined an exclusive club with Jack Nicklaus and Tiger Woods—finishing no less than 5th in all of the four major golf championships. Now, does Rickie have the capacity to “close the deal” and win? Fowler has just one tour win and that was in ’12. This year could be the breakout he needs to show he can not only challenge but hoist the winning hardware above his  always colorful headwear.

The world’s number-one player clearly separated himself from all others with a summer of golf in ’14 that goes beyond words. McIlroy has now claimed three of the four major championships in his very young career and now heads to Augusta this spring to become the third youngest to have won all of the majors in a career. Winning at Augusta would also be his third straight major win in a row—Herculean stuff no doubt if should come to being.

Is golf able to turn the corner and attract millennials to the game?

The topic for many in the industry—specifically those selling equipment and operating golf courses—is how to attract a new generation of players. Total number of golfers in America is falling. The core players—50+ rounds per year—is now skewing much older. Course closings outnumbered course openings by a 10 to 1 ratio. In a twitter world where instantaneous feedback is the norm, can a difficult and expensive game to learn like golf succeed in attracting such players? Right now the answer is clearly favoring the “no” side.

Who will the PGA name as the next American Ryder Cup Captain?

Given the negative  bombardment Tom Watson endured after the defeat at Gleneagles, it’s likely the next USA Captain will be someone that can fit the fragile princess psyches of the American team members. The likely choice? Fred Couples. Fred served well as Captain of past President’s Cup Matches and is enough of a contemporary for existing Tour players to feel comfortable with him at the helm. Of course, this all presupposes the American side actually makes key shots and sinks critical putts when the situations demand. The Captain’s position has been used to obscure the fact that top notch execution has not been happening at the Ryder Cup for Team USA.

Can the uber-talented Dustin Johnson break through and finally achieve super stardom?

Dustin Johnson is expected to return to the PGA Tour at the annual stop in San Diego at Torrey Pines. Johnson took a self-imposed sabbatical from the Tour this past summer—violating the Tour’s substance abuse policy has been mentioned repeatedly as the reason, although it’s been denied by the Tour itself. Can ’15 be a big time breakout for him? Johnson has won numerous times on the PGA Tour but in key moments in major events he has shown a clear inability to hit the optimum shot when called upon. Indications are Johnson is readying himself intensely with physical conditioning and in tuning up daily. Does Johnson have the passion to really apply what he possesses? No more excuses.