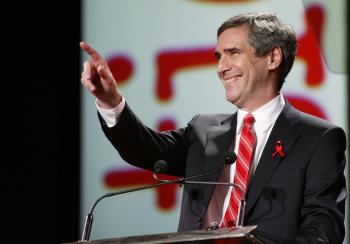 When Liberal Leader Michael Ignatieff vowed this fall to bring the Conservatives down just as the economy was starting to look up, pollsters found that Canadians weren't having any of it. (David Boily/AFP/Getty Images)
US

Stories that Mattered in Canada in 2009

As we prepare to ring in 2010, The Epoch Times takes a look back at 10 of the top news stories that characterized 2009 across Canada.

This year, Canadian politics has been a roller coaster of election speculation that brought the Conservative government to new heights of popularity and the Liberals to new lows.

After the upheaval that followed last year's controversial coalition of the three opposition parties which joined forces in a bid to oust the Conservatives, it was reasonable to assume the coming session of Parliament would be tumultuous. At some point, every major issue seemed to prompt election rumours, leaving journalists chasing for an easy headline and voters disappointed at their elected officials’ inability to work together.

When Liberal Leader Michael Ignatieff vowed this fall to bring the Conservatives down just as the economy was starting to look up, pollsters found that Canadians weren't having any of it. The harder Ignatieff fought to bring down the Conservatives, the lower his party's election prospects became.

Since then, Ignatieff's popularity has been crushed by poor political decisions and election talk has all but disappeared.

When telecom giant Nortel Networks Corp. applied for bankruptcy protection in January 2009, workers soon learned that their severance, disability, and pension incomes had vanished even as, globally, $45 million was paid in bonuses to senior Nortel executives and other key employees.

With pension funds less than 70 percent secured, laid-off and pensioned employees discovered that their retirement years could be spent in penury.

Employee pension claims are at the end of the line behind other creditors as the Nortel business units are sold piecemeal to raise funds needed to pay down debts.

In October Nortel employees and representatives from other labour unions rallied on Parliament Hill seeking pension reform that would protect pension monies.

In early December, NDP MP Wayne Marston introduced a private member’s bill (Bill C-487) that would amend the Bankruptcy and Insolvency Act to protect employee pensions when companies go bankrupt. Private member's bills, when they pass, usually take a while.

Stimulus Spending Comes With a Price

When Parliament resumed after being prorogued almost immediately after the last election, the Conservatives did an about face and introduced a massive stimulus budget geared at spending the Canadian economy out of the global recession.

Since then, the opposition parties, which demanded the budget, have decried delays in getting projects off the ground and apparent favouritism toward projects in Conservative ridings.

For its part, the government has basked in the glow of spending announcements and a robust Canadian economy that has weathered the worst of the downturn without the dire job losses some economists were predicting.

But now the reality of all that spending is starting to hit home. A massive deficit, projected to top $55 billion, is coming due and Finance Minister Jim Flaherty has already started talking about the need to cut programs.

The Prime Minister's recent trip to Beijing came after years of cool political relations between the Chinese regime and Canada, including Harper's famous pronouncement in 2006 that he would not sell out human rights for the “almighty dollar.”

But after months of sending high-level officials to China, the PM went there himself this December and talked trade while repeating that human rights was an integral part of Canada and that he would not drop rights talk in pursuit of better business ties.
Harper took some unprecedented public criticism from Chinese Premier Wen Jiabao for the delay of his visit—criticism that was promptly echoed by some Canadian opposition politicians and pundits.

But Harper walked away from the trip with Approved Destination Status for Canada which will make it easier for Chinese to visit here, something the Liberals had tried to achieve for the better part of a decade. It seems raising human-rights hasn't hurt trade.

The Canadian sports story of the year began when billionaire Jim Balsillie offered US$212.5 million to buy the National Hockey League’s bankrupt Phoenix Coyotes contingent on moving it to Hamilton, Ontario.

Balsillie, a Canadian and co-CEO of Blackberry smartphone maker Research in Motion, launched a website to garner public support for his dream to bring a seventh NHL franchise in Canada. Over 200,000 fans supported the bid online. Even PM Stephen Harper chimed in to say southern Ontario could support more than the Toronto Maple Leafs franchise and favoured a second team, though declining to comment on Balsillie's bid.

The complex bankruptcy case touched on varied areas of law and was fraught with conflicting legal questions. But despite his strongest efforts including upping his offer to US$242.5 million, Balsillie finally lost his battle in September when Arizona bankruptcy judge Redfield T. Baum denied his bid.

However, Balsillie has not gone away quietly, and NHL authorities have acknowledged a second team in southern Ontario would profit the league.

Canada has been the poster child for climate-change laggardness, but perhaps that view is beginning to change. With Alberta’s oil sands a lightning rod for criticism from climate activists and a prime minister who has in the past condemned the Kyoto protocol, Canada hasn’t exactly been winning environmental hearts.

In 2009, the Conservative government repeatedly stressed its belief in climate science and its intent to help broker a strong, binding deal in Copenhagen. And the government stuck to these talking points, even winning praise from UN officials.

A boost to Canada’s rebranding effort came with renewed focus on the key players missing from the Kyoto pact—the Americans and the Chinese. Canada said its targets would match those of the U.S., reminding critics of its lack of influence and relegating it to second-rank player.

But when a weak Copenhagen deal was sealed, criticism turned not to Canada but to China. U.K. climate secretary Ed Miliband said the Chinese regime had vetoed an agreement supported by most developed and developing countries that would have cut global emissions by 50 percent (80 percent for developed countries) by 2050. His rebuke was echoed by others.

Suddenly, and for once, talk focused on China, the world’s largest CO2 emitter, leaving Canada out of the spotlight.

As 2009 progressed the impact of the global economic crisis was felt across the country. In an effort to stay afloat, companies lowered production levels and slashed jobs. The manufacturing sector was particularly hard hit.

Stimulus spending became the order of the day, and Finance Minister Jim Flaherty allocated billions to help the country weather the economic downturn. The opposition called for lower Employment Insurance requirements, with the Liberals threatening to use the issue to trigger an election.

Because of its strong banking sector, Canada managed to escape some of the worst financial fallout experienced in the United States and some other countries.

In recent months, global financial markets have shown signs of growth and appear to be on the mend. On Dec. 17 Toronto-Dominion Bank declared the recession over and predicted Canada's economy would grow by 2.7 percent next year.

Allegations of Afghan prisoner abuse that emerged in October became the scandal of the year. Senior Canadian diplomat Richard Colvin claimed that since spring 2006 he had repeatedly warned senior foreign affairs officials about the clear risk of torture facing prisoners transferred by Canadians to Afghan custody.

The federal government maintains it did not receive credible evidence until late 2007 and denies a cover-up. The allegations have led to calls for an independent public inquiry.

In December, documents revealed that in 2008 Canada’s military police launched six investigations into allegations that Canadian troops abused Afghan detainees. The military determined that five of the cases were unfounded. The remaining investigation is ongoing.

This month, the military announced that a Canadian captain charged with killing an Afghan insurgent will face court martial in January.

The year drew to a close overshadowed by the tragic death of a Canadian soldier on Dec. 23, bringing the 2009 death toll to 28. With Canada’s mission slated to end by December 2011, the Conservatives have indicated that Canada may stay in a non-combat role to support development and reconstruction.

From the word go, Canada’s mass immunization effort against the H1N1 flu pandemic seemed to be fraught with difficulties that included delays, vaccine shortages, and massive lineups.

The death in late October of a healthy 13-year-old Toronto boy, coupled with a steady stream of media hype, turned the swine flu into a full-blown public-health scare. Vaccination clinics across the country were overwhelmed and in some provinces patients were turned away.

Two Alberta Health Services employees were fired after Calgary Flames players and their families were allowed to jump the queue while those at risk, such as young children and pregnant women, were still waiting for their shots.

But H1N1 turned out to be far less severe than the regular seasonal flu and never became the widespread threat that health authorities feared. According to the Public Health Agency of Canada, the virus now appears to be on the wane.

Vancouver Readies to Host the World

The City of Vancouver began 2009 in the midst of a crisis after a New-York-based company pulled its backing for the Olympic Village as a result of the global economic downturn. This left taxpayers on the hook for the $940-million village, which went millions over budget.

However, the project was completed on time and the new Olympic Village—said to be the country’s greenest neighbourhood—was formally handed over to Olympic organizers in November.

Another boon to Vancouverites thanks to the Olympics is the new Canada Line Skytrain that connects downtown, the airport, and the Robson Square outdoor skating rink that reopened after being closed for almost a decade.

Games-related controversies throughout 2009 include questions around how the B.C. government plans to use $1 million worth of Olympics tickets purchased at taxpayer’s expense; the Hudson's Bay Company’s decision to sell knock-offs of traditional hand-knit Cowichan sweaters as official Olympic merchandise; and protests in several cities as the Olympics torch makes its way across the country.

But outstripping the storms and scandals is a blooming national pride as Canadians prepare to cheer on their athletes as they go for gold in February.