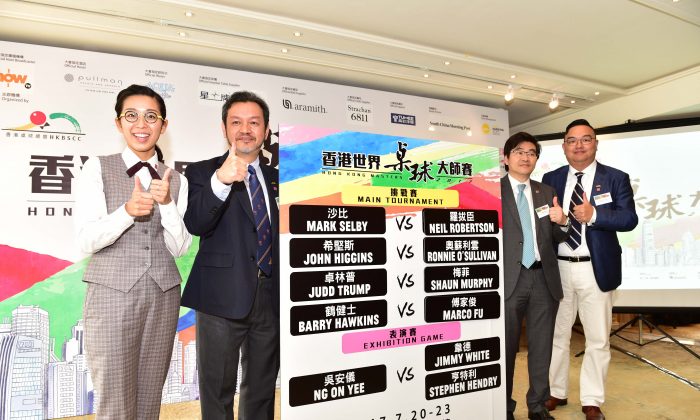 HONG KONG—The Hong Kong Snooker Masters that will take place at the Queen Elizabeth Stadium between July 20 and 23, is the first top ranked tournament for many years.

Total prizemoney of GBP315,000 (HK$3.1 million) is not huge compared with the top international tournaments but it is still sufficient to bring in 7 of the top 8 world ranked players and a number of other well-known past champions that have now slipped down the rankings.

The list of players is eye catching with Mark Selby heading a star studded line up including John Higgins, Judd Trump, Barry Hawkins, Marco Fu, Neil Robertson and Shaun Murphy plus Ronnie O’Sullivan who has now slipped to 14 in the world. The only top 8 player that is missing is Ding Junhui of China.

This is the first tournament of this stature to be played in Hong Kong and will be a real showcase event. The last high level tournament was held 10 years ago, but the line-up was more limited.

The draw for the quarter finals will be Barry Hawkins against Hong Kong’s Marcus Fu, Mark Selby against Neil Robertson, Judd Trump against Shaun Murphy, and John Higgins against Ronnie O’Sullivan – what more could one ask for!

The quarter finals to take place on July 20 and 21, will be ‘best of 9 frames’ and the semi-finals and final will be best of 11 frames. Matches will start at 2pm and 7pm.

There will also be single frame exhibition games on the final day with Jimmy White and Stephen Hendry playing against On-Yee Ng,