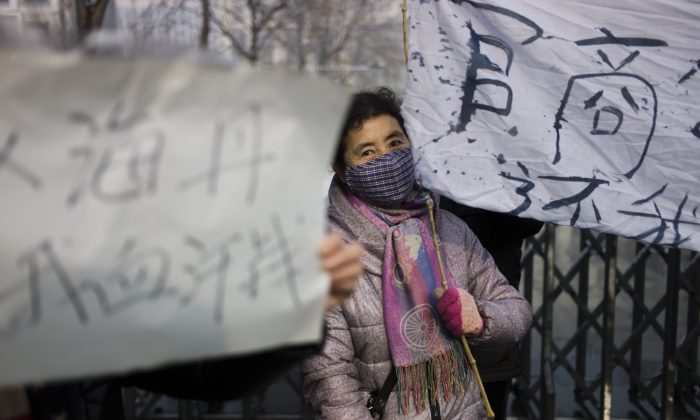 A woman holds up a banner as a group protests about alleged local government wrongdoing and unpaid wages outside the Langfang Court on Dec. 10, 2014. (Fred Dufour/AFP/Getty Images)
China

When Ai Baojun, the deputy mayor of Shanghai, was removed from his post and put under investigation last week, he became the first high-level official in the largest Chinese city to be purged since the beginning of the anti-corruption campaign three years ago.

Observers of Chinese politics based in the city see the move as part of a continued sweep of the presence of former Party leader Jiang Zemin from Shanghai, the city that had been his power base for decades.

Jiang went from being Party secretary of Shanghai to general secretary of the entire Communist Party after the Tiananmen Massacre in 1989—but the factional roots he laid down in the city aided him in consolidating power in the decade that followed. Shanghai also became one of China’s fastest growing cities, receiving a battery of industrial and financial subsidies to accelerate growth at the expense of other areas in the country.

Zheng Enchong, a Shanghai-based lawyer who has contended with members of the “Shanghai gang” for years, said in an interview that Ai Baojun was certainly the first “tiger,” meaning powerful, corrupt official, to be taken down—but that he is not the most powerful tiger in the city. Zheng added that Jiang Zemin’s power in Shanghai has been vast, and the removal of Ai may be the beginning of a broader campaign to rid the city of Jiang’s influence permanently.

Ai, in particular, appears to share commercial and political ties with both of Jiang Zemin’s sons. The news of his ouster came on Nov. 10.

Ai served in the Shanghai Baosteel Group Corp., known simply as Baosteel, for 13 years in Shanghai, and was promoted up to general manager. Baosteel is one of the largest state-run companies in Shanghai, where it is headquartered.

Baosteel, because of its Shanghai base, is believed to have become part of Jiang’s political empire during his period ruling over the city. Sinecures and revenues from state-owned companies like Baosteel, which enjoy monopoly profits, are often doled out to political allies and loyalists. Over 30 officials at Baosteel have already been investigated since April 16.

This March, Cui Jian, the deputy manager of Baosteel was investigated by disciplinary authorities. Cui was one of Ai’s aides in the firm.

“Shanghai has always been Jiang’s base, and he brought a group of officials from Shanghai with him to the center, which is why it was called the ‘Shanghai Gang'” said Zhao Yuanming, a legal expert that runs a political talkshow on Sound of Hope radio based in California.

“Baosteel, as a large state-owned company headquartered in Shanghai will inevitably come under the gang’s control. Jiang wouldn’t let go of Baosteel because of the huge profits and influence it has,” Zhao said.

Before Ai was removed, there were already signs that he was being targeted. Apart from the removal of Cui Jian, there was also the purge of Dai Haibo, another of Ai’s former aides. Dai, who was also said to enjoy ties with the Jiang family, was removed from his position as deputy secretary of the Shanghai municipal government on April 8.

Dai was the legal representative of five large state-owned firms, including the Shanghai 863 Information Security Industrial Base Co. Ltd., whose business, according to Zheng Enchong, involves state secrets and operates under special permissions granted by security agencies. The business, Zheng said, interacts with the work of Jiang Mianheng, Jiang’s eldest son and for many years a large player in the telecom industry.

Dai also served as a director on the commission controlling the Shanghai Free-Trade Zone, whose development involves land issues—thus falling under the influence of Jiang Miankang, Jiang Zemin’s second son, said Zheng Enchong, based on his understanding of local power politics. Zheng believes that the Jiangs and Dai share a long association.

Last September, when Dai was removed from his position as director of the Shanghai Free-Trade Zone, Ai said it was “normal personnel changes,” and Dai was still assisting with his work.

Another indication that Ai Baojun’s downfall was imminent was the appointment, on April 8, of Shen Xiaoming, as another director to the Shanghai Free-Trade Zone. The official press said that it was for a more effective division of labor, while overseas publications saw it as a sign that Shen had been promoted, and Ai was on the way out.

In response to Ai’s arrest, Han Zheng, the secretary of the Shanghai Party committee, called a meeting and released an official statement through state propaganda channels that he “resolutely supports the decision of Party Central.” Han Zheng has long been understood to be a member of Jiang’s clique, though speculation now suggests he may be throwing his allegiance behind Xi Jinping in the “struggle” against corruption.

The timing of the announcement of the investigation of Ai Baojun was also noted in the Chinese press: it came on the seventh day after the death of his wife, of a kidney disease, in a Shanghai hospital. Chinese reports said the decision to remove Ai had been made before her death, but they waited for it to be announced for humanitarian reasons. The seventh day after a death, nevertheless, is an important part of traditional Chinese funerary tradition. Called touqi, it is the day on which the ghost of the deceased is said to come back and visit the family before departing to the hereafter.

Luo Ya and Li Jun contributed to the report.