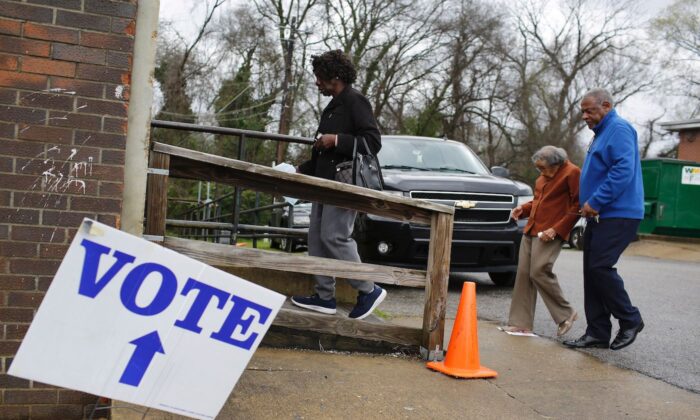 Voter enters a polling station at Floyd Middle Magnet School during the Democratic presidential primary in Montgomery, Alabama, on March 3, 2020. (Joshua Lott/AFP via Getty Images)
US

As the 2022 election approaches, Alabama candidates have campaign platforms that lean conservative.

This year, Alabama tied with Wyoming as the second-most conservative state in the nation.

Even Democratic campaigns there have kept issues like gun control, illegal immigration, and abortion off their campaign platforms.

In the same vein, many Alabama Republican campaigns are loudly pro-Trump.

Republican and Democratic campaigns across Alabama have focused on the following issues.

The Alabama primary elections will be held on May 24.

Opinion on former president Donald Trump is an important issue for Alabama Republicans.

In the state’s Senate race, candidate Mo Brooks has an endorsement from Trump, while candidates Katie Boyd Britt and Mike Durant don’t. The highest item on Durant’s online campaign platform is his support for Trump.

Among House Republicans in Alabama, six of the eight major Republican candidates running for the state’s seven House seats mention their support for Trump on their campaign websites.

For instance, Democratic candidate Charlie Thompson said he supports the Second Amendment and a balanced budget. Even his arguments for stopping climate change stem from a belief that “God gave us this world and dominion over it.”

Three states stand between Alabama and the Mexican border, but most Republican candidates mention opposing illegal immigration in their platforms.

With rising numbers under President Joe Biden’s administration, illegal immigration isn’t just a border issue. The 2 million people who crossed the border unlawfully in 2021 are bound for destinations across America.

As China has grown more powerful, America’s foreign policy has begun to look with concern across the Pacific.

In this election, several Alabama Republican candidates have focused on strengthening America’s position against the threat of communist China.

Alabama has a strong economic connection to China. In 2021, China was Alabama’s fourth-biggest trading partner, with a total of $2.3 billion in imports from Alabama. Alabama also imported $3.2 billion worth of goods from China.

Republican campaigns across Alabama have focused on lowering taxes and decreasing the size of government.

Other Democrats have suggested spending more money on infrastructure to help businesses recover from the COVID-19 lockdowns.

After widely publicized claims by Donald Trump that the 2020 election was rigged, many Americans are more concerned about election security than ever.

Among Alabama Republicans, increasing election security has been a major campaign point. Many of the candidates for 2022 support increased election safeguards such as mandatory voter I.D. cards.

With a conservative majority on the Supreme Court, many political leaders see the potential for big changes to abortion law.

In Biden’s State of the Union address, the president said that abortion is “under attack as never before.”

In Alabama, the vast majority of Republican campaigns oppose abortion.

If the Supreme Court overturns Roe v. Wade in the upcoming months, the position of congressional representatives on abortion may be very important.

Alabama Democratic platforms are largely silent on abortion, but a few candidates strongly support it.

Alabama Republican candidates also support the Second Amendment, along with some Democratic candidates.

Most platforms don’t mention gun rights, but the few Democratic platforms that do tend to support them.

Many Alabama Democrats say they want to strengthen infrastructure with improvements like rural broadband internet, better transportation, and better water and energy use.

According to the American Society of Engineers’ 2021 Report Card for America’s Infrastructure, about 11 percent of Alabama’s roads and 4 percent of its bridges were in poor condition.

Alabama’s Republican governor, Kay Ivey, has prioritized infrastructure creation during her tenure as well, and the state will soon receive billions for infrastructure from the Infrastructure, Investment, and Jobs Act.

Most Republicans running for office in Alabama don’t have infrastructure on their platforms.