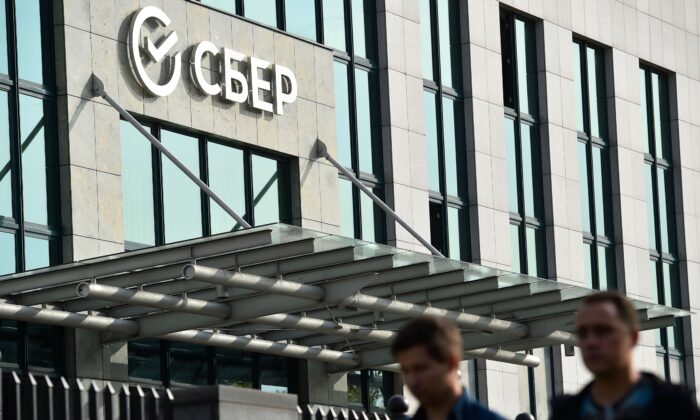 A view shows the new logo of Russian bank Sberbank on its headquarters in Moscow on Sept. 25, 2020. (Natalia Kolesnikova/AFP)
Markets

Russian banks have shrugged off the impact of Washington’s sanctions, which were imposed following Russia’s invasion of Ukraine, insisting that they continue to function normally.

Sberbank, Russia’s biggest bank, said it was studying the implication of American sanctions. “Sberbank and all its systems are operating normally, their funds and services are available to individuals and legal entities in full. We are ready for any development of the situation and have prepared scenarios to guarantee the protection of funds, assets, and interests of our clients,” the bank said to a Russian News Agency.

Alfa-Bank, the largest private bank in Russia, revealed that it has been blocked from placing share issues or issuing new Eurobonds. But since it is not a public company, the share restriction has had no effect on the institution.

Gazprombank asserted that it was serving both corporate and retail clients as usual, with its customers having uninterrupted access to the bank’s products and services. VTB bank said that its online services, ATMs, and branches are operating normally. Russian online bank, Tinkoff, claimed that it has “sufficient liquidity” and is replenishing ATMs on a “reinforced schedule.”

Russia’s central bank has reportedly decided to intervene in the forex market in order to stabilize the country’s financial market. The central bank is also acting to provide enough liquidity to the country’s banking sector and noted that it was willing to use additional tools to ensure the stability of Russia’s banks as well as their clients.

Combined, Russia’s financial institutions conduct around $46 billion worth of forex transactions internationally on a daily basis, of which 80 percent are in U.S. dollars. The vast majority of these transactions “will now be disrupted,” the Treasury said in a press release.

Sberbank and VTB, which account for over 50 percent of Russia’s total banking system by asset value, will be cut off from processing payments via the U.S. financial system.

The Treasury’s Office of Foreign Assets Control (OFAC) has instructed all U.S. financial institutions to close off “any Sberbank correspondent or payable-through accounts” as well as reject future transactions that involve the Russian bank or its subsidiaries. OFAC has imposed “full blocking sanctions” on VTB bank as well as any entities owned 50 percent or more, directly or indirectly, by the bank

In addition, three major Russian financial institutions—Sovcom, Novikom, and Otkritie—have been sanctioned by OFAC. The organization also “heavily restricted” 13 major Russian firms critical to the Russian economy from raising money via the U.S. market, which include Sberbank, Alfa-Bank, and Gazprombank.

Meanwhile, Ukraine’s central bank has blocked payments to entities in Belarus and Russia. It also prohibited financial operations that involve currencies of these two nations.